.
After last Friday's journey to Salem on the TU, in near freezing temperatures, I haven't been back on the bike. The weather has finally warmed up a bit, but I don't think plans will coincide with riding this weekend.
While looking through iPhoto this afternoon I realized from the pictures that I'd neglected to posted up about day two from our road trip to Seattle for the International Motorcycle Show in December. Since it is already January, I thought I'd better take advantage of this slow riding time and share the tale now.
This was the view from our hotel room: 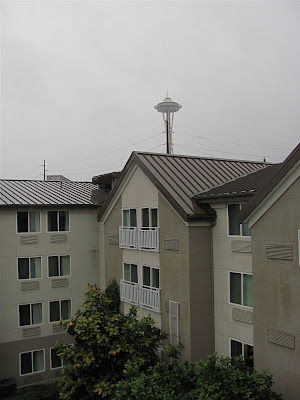 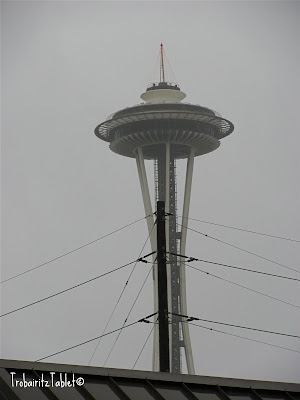 Sunday morning we woke, combed our hair, and went down to the lobby/breakfast room of the hotel in search of coffee. We figured we'd fill our travel mugs and take them back to the room to drink as we got ready for the day. Bobskoot was already downstairs and had a table so we sat with him and visited while he ate his breakfast. We managed to score a few mini muffins to tide us over to dim sum. Unfortunately the coffee was too weak. I think I drink tea stronger than the coffee was that morning. Wait, weren't we in Seattle, you know, the land of Starbucks? Apparently our hotel had not learned how to make proper coffee but we survived.
After visiting for a while I headed back to our room to get ready. Troubadour followed and stated we had to meet downstairs to head to dim sum at 10 am. Armed with a map and an address from the front desk we managed to find the great place we ate last year - Jade Garden Restaurant. After sampling their wares last year we were hooked on dim sum. We even tried 4 places in and around Portland but they just weren't as good or as inexpensive.
We parked and made our way to the restaurant. Bobskoot dropped off Mrs. Skoot and went to park his car. Troubadour took a picture while we waited under the canopy out of the rain. 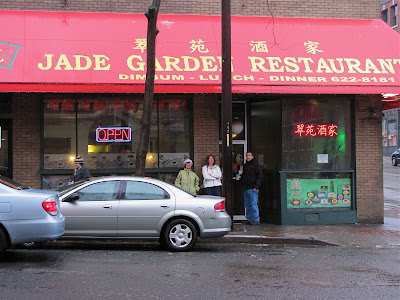 (Mrs. Skoot on the left, me in the middle, and Rick on the right)
He also snapped this pic of Bob as he was walking to the restaurant tripod in hand. 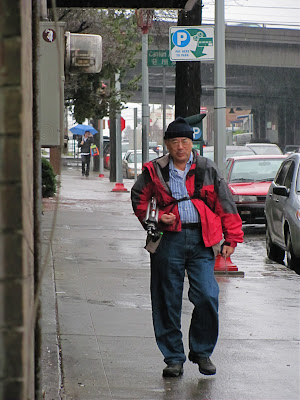 Tbolt had plans with family for breakfast that morning and was meeting us at the restaurant. We figured we'd best get in and get a table. We were promptly seated at the back of the restaurant at a big table with a lazy susan in the middle. Tea was served and the carts started arriving with the goodies. 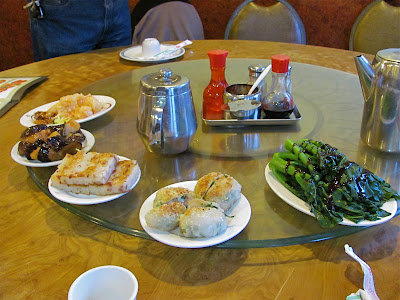 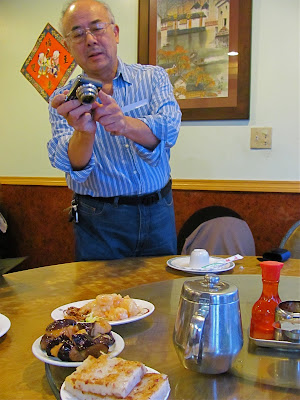 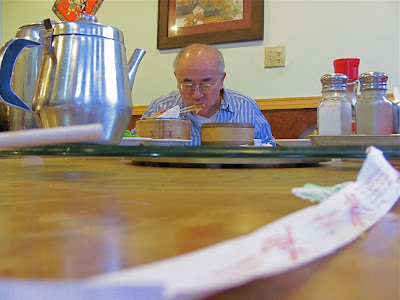 We enjoyed a nice leisurely meal. We visited, we chatted, and we told stories. Just as we were finished Tbolt arrived. We then sat around for another half hour or so and drank more tea and chatted even more.
Before long it was time to leave. We made our way through the restaurant and outside. Bobskoot set up his tripod and managed to get a few pictures of our group before we parted ways. We are still waiting to see how those turned out. Goodbyes were said and hugs were given out.
Bob and Mrs. Skoot headed north and the four of us headed south. As we were leaving the International district I snapped a few pictures out the window. 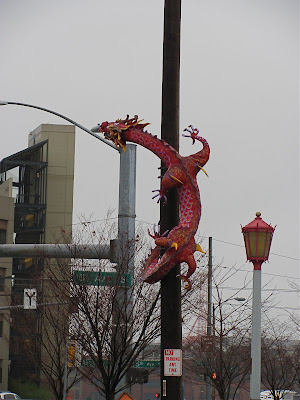 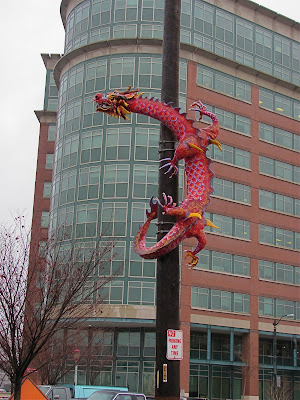 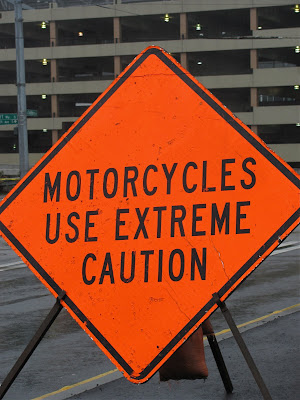 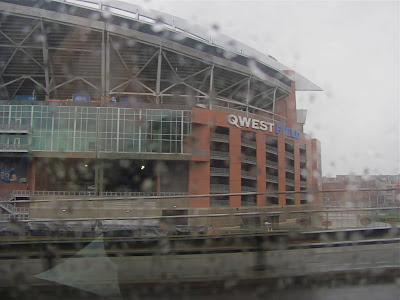 A couple of lefts and rights later and we were on I-5 heading home. Our first stop was in South Tacoma where Rick introduced us to Eagle Leather, Motorcycle Gear & Accessories. The place was huge. You could tell they catered to a cruiser market but at the same time they had brands of helmets and gear we'd never seen in person only on the internet. We probably wandered and looked around for about an hour. Troubadour bought some orange reflectors for his license plate frame. Not sure if any other purchase were made.

Oh look - there is a Starbucks across the way. Rick was driving so I thought I'd best offer a bribe. I offered to pay for his drink if he would stop at Starbucks. The bribe was sufficient and as if by magic the Trooper headed in that direction. I so needed a real cup of coffee after drinking the ick from the hotel that morning. Yeah, I know we only drink decaf, but my brain needed the aroma and taste of real coffee. Grande soy latte please.
We chose our drinks, paid some money and soon our drinks were made. Back outside we went. As we got back into the vehicle I noticed my mug was only half full. Not cool. I asked everyone to wait while I headed back inside for a remake. When I asked the staff to remake the drink they said no problem.

It took a little longer than anticipated. Not because they made it a second time, but because I asked them to make it a third. That's right, their second try was only 2/3 full. Third time was a charm and I headed out a happy camper. Back in the Trooper, good natured teasing ensued about me being a Starbucks hard ass. I didn't care, I was euphoric from my full mug of real coffee. Sufficiently in a coffee stupor we once again headed South towards home.
As we were passing Lacey, Washington.... wait, what's that? A Cabela's store to the west? Must go to Cabela's..... 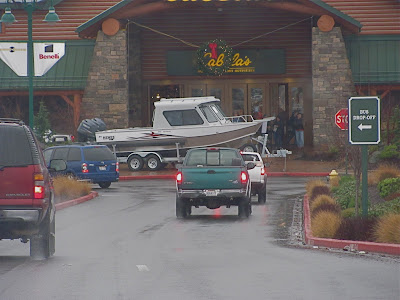 For those of you who don't know Cabela's, they call themselves the "World's Foremost Outfitter." They have everything you ever need for outdoor activities and a lot of things you don't. They have a guns and ammo section, camping, boating, clothing and outerwear, housewares for the rustic folks, patio lights made from real shotgun shells and even toys and games for the kids. 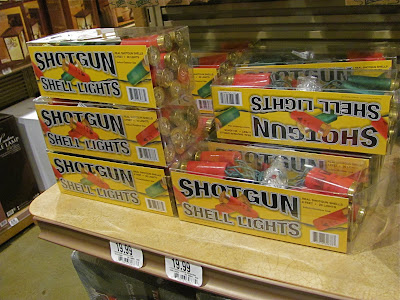 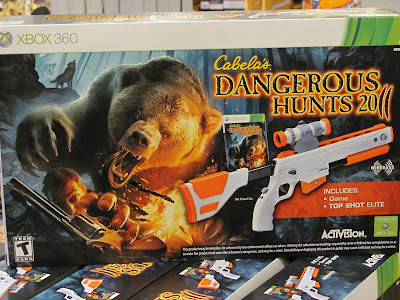 They even have really big chairs.... 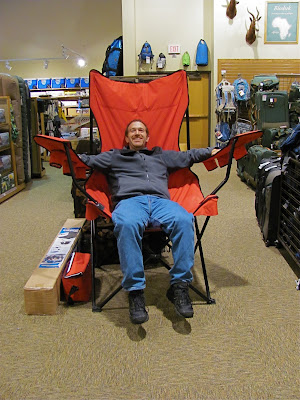 Two entire floors of backwoods redneck fun. Good for wasting time and getting some exercise while travelling. They do have some very nice displays though. 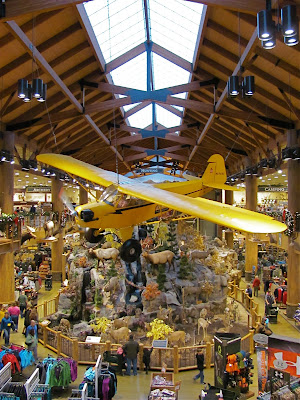 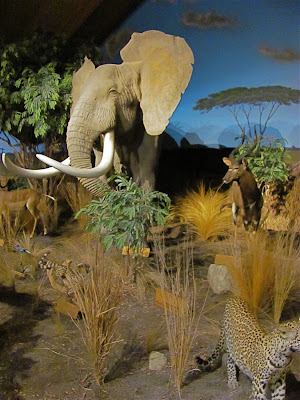 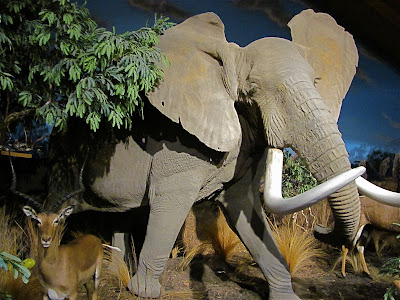 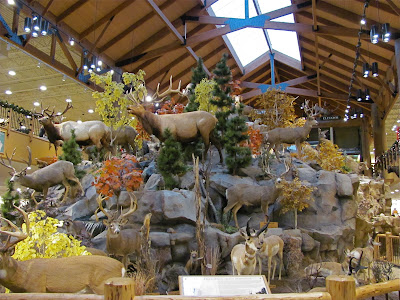 It was dark by the time we made it out of the store. We headed south once again and dropped Rick off in Portland since he had some business to attend to the following day. Troubadour drove us the rest of the way home.
It was only a two day adventure but somehow it made the weekend seem so much longer. Good times.
-Au Revoir
"No one realizes how beautiful it is to travel until he comes home and rests his head on his old, familiar pillow." ~ Lin Yutang
.
Posted by Trobairitz at 3:20 PM