.
Last Sunday was the first annual family picnic for our local riders forum. Over a month ago a forum member suggested a date and a meeting place and we ran with it. Luckily the forecast was for sunny skies.
It was a potluck picnic and the items we chose to bring couldn't be made up the night before or they wouldn't have tasted as good. So, Sunday morning I was up at 7 am and had a quick cup of coffee, surfed the interweb a bit and made 2 dozen pumpkins scones. While they were cooling I washed my hair, put on my make up and got dressed. Then I made the entree: Peanut Sesame Pasta Salad. I nice mixture of farfalle pasta, fresh crunchy veggies and a creamy sauce made with all natural peanut butter, soy sauce, ginger, garlic and some other spicy things. Troubadour was great and helped me get the salad ready as well as load up both bikes.

I had just enough time to get my gear on and we were out the door riding in the chilly morning air. Hooray, heated grips.

We had about a 15 mile ride down to Bellfountain to Bellfountain Park for the picnic. Bellfountain Park contains one of the longest picnic tables in the world. The covered picnic table is 85 feet long and was milled from one continuous piece of wood. The park dates back to 1851 and has seating for over 100 at the table. We stopped at a major intersection about a mile from the park for Troubadour to hang signs for those that didn't know where to go. 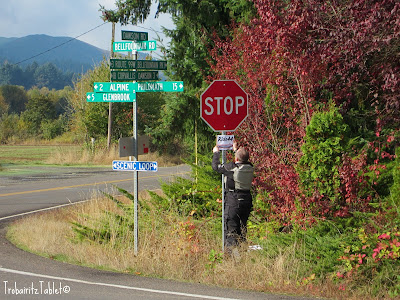 People mentioned that they'd almost missed the turn, but not one person that we asked actually saw the signs that he posted. Troubadour gets an 'A' for effort though.

A few people were already there when we arrived and we began putting out table cloths and food and utensils and plates.

The charcoal was lit for the burgers, hot dogs and jerk chicken that folks had contributed. 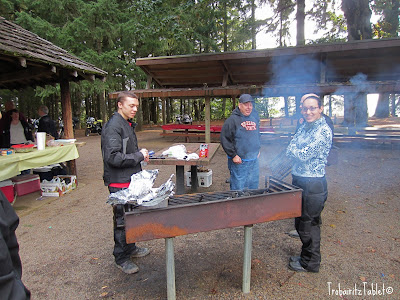 Josh tended to the burgers. 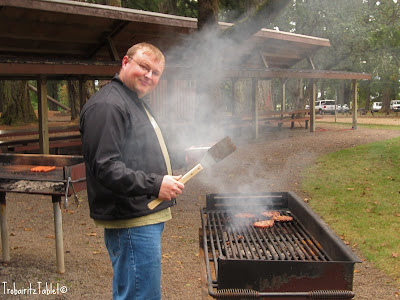 More people arrived. Some on their bikes and others in the car with their families and/or dogs.

All the food was spread out buffet style. People filled up their plates....... 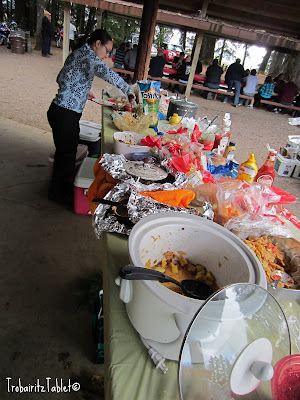 And then sat down along the picnic table to eat and visit. 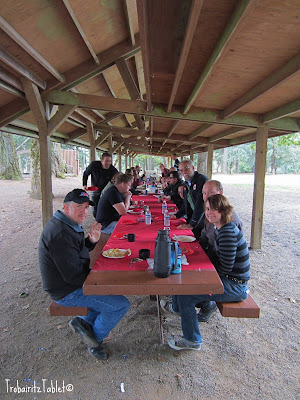 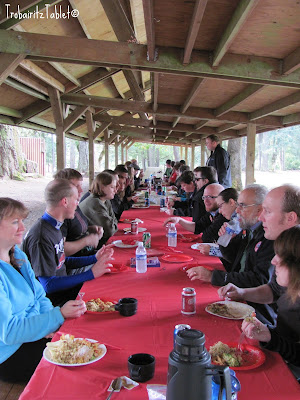 (View from one end of table) 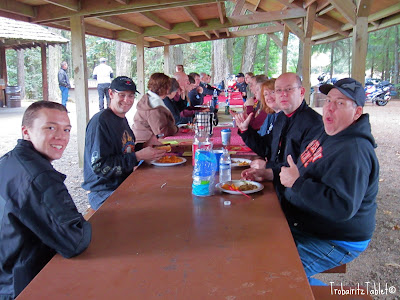 (View from the other end of table) 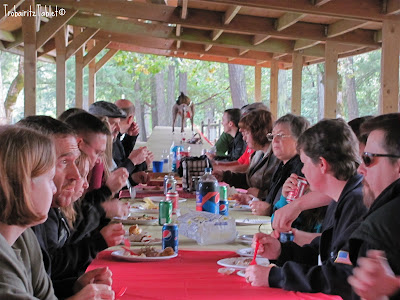 (I think the boxer just wanted a better view) 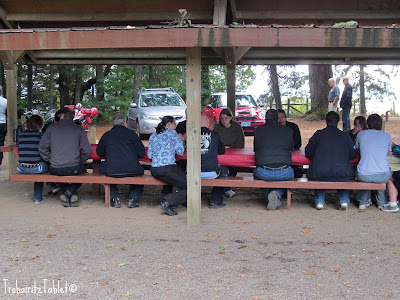 While everyone was visiting and with my belly full, I got up and wandered towards the buffet to see if I could get some food pictures. 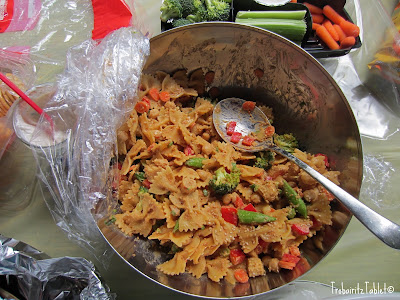 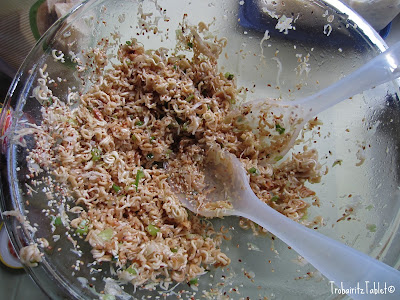 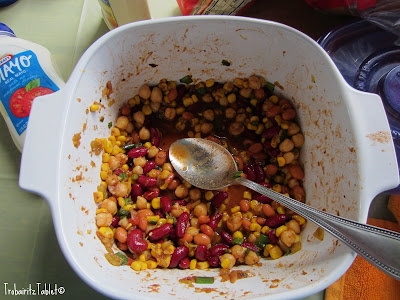 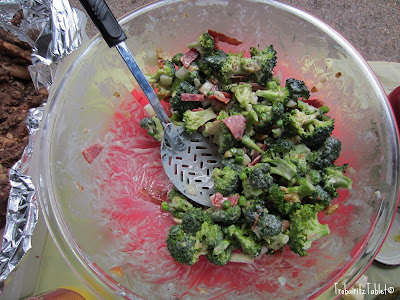 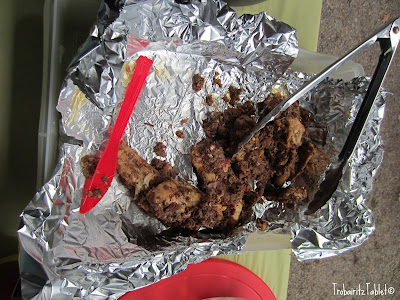 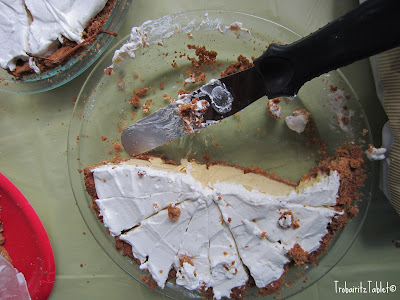 (Key Lime Pie)
Troubadour realized the sun had come out, but because of the tall trees we needed to move into the field to enjoy it. 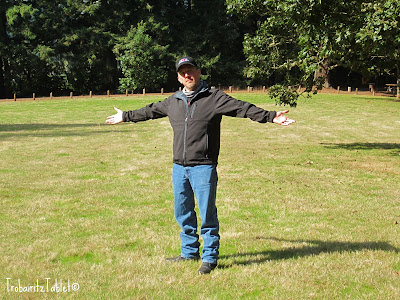 Eventually most people gravitated towards the sun and we visited for a few more hours.
We talked.... 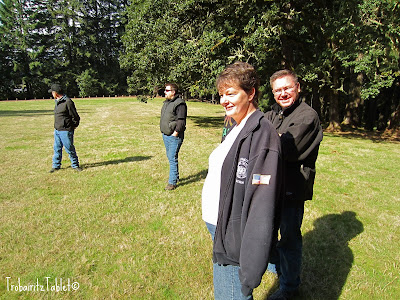 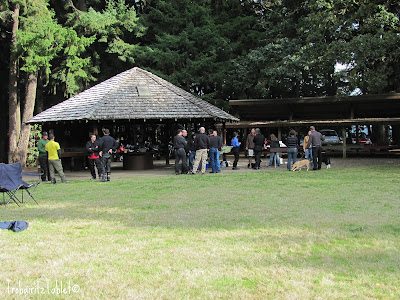 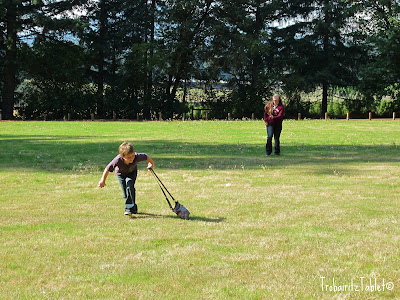 And the dogs were playful too..... 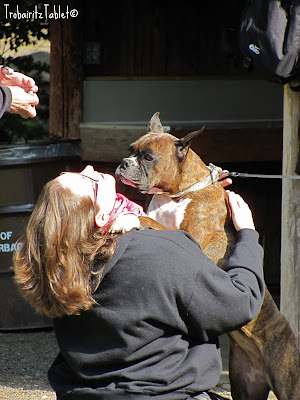 Of course, I had to take some pictures of the motorcycles.... 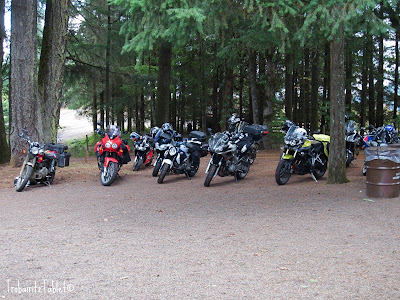 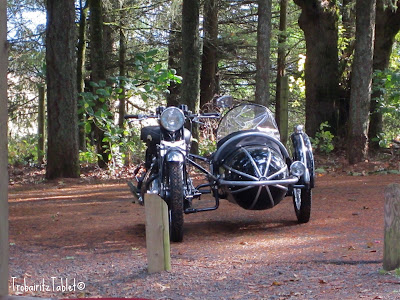 And one really cool souped up Mini Cooper. 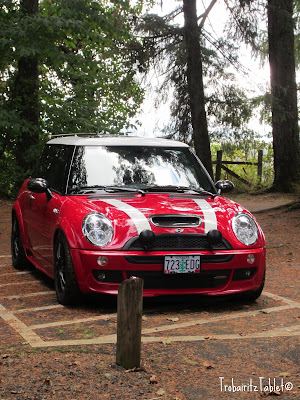 Everyone reported that they had a great time. Not only do we want to make this an annual fall event, but are also thinking of having one in the spring to kick off the riding season and hope that those that couldn't attend this one might be able to make it next time.
- Au Revoir

"Spend the afternoon. You can't take it with you." ~ Annie Dillard
.
Posted by Trobairitz at 7:49 AM