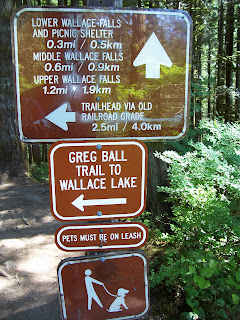 I haven't posted much except for the cat pictures in the last week or so. We have been busy. Last weekend was the second annual Bro's and Frau's Wallace Falls State Park camping trip. Troubadour and I and his brother Barrie and sister-in-law Lisa all met at a central location last year and shared a cabin for a long weekend of camping and hiking. We had such a great time we planned it again this year only a month earlier as it was too darn hot at the beginning of July last year. This year we even decided to invite Troubadour's mom Mavis and stepdad Chip. The more the merrier.
The inlaws all have dogs and there is only one pet friendly cabin so we had to have a private cabin. Oh darn. It was nice to have a place to retreat to to be by ourselves each night. It helped that we brought a fan and an electric coffee pot.
Saturday morning at 5 am we packed our little Nissan Versa hatchback up and headed out by 7 am. East to I-5 we went then North on I-5. Made a quick stop in Wilsonville at Starbucks for yummy decaf soy lattes and also at Chevron to fill the car. Made it through Portland and Vancouver, Washington with little trouble and finally found a rest area closer to Olympia. Why is it that Oregon's side of I-5 had a lot of rest areas and no state troopers on the road and the Washinton side of I-5 had a ton of state troopers but rarely a rest area? Good thing we didn't order a vente coffee.
Troubadour was rocking his kilt so when we stopped at Fred Meyer in Monroe to stretch our legs, and yes, have another Starbucks he received several comments. One was a "daaaamn, you are looking fiiine." You know it is a good day when you can get a two syllable damn. We didn't get any pictures of him in his Clan McLaren tartan kilt but here is one of him in his locally made Celtic Warrior Kilt on the hiking trails. 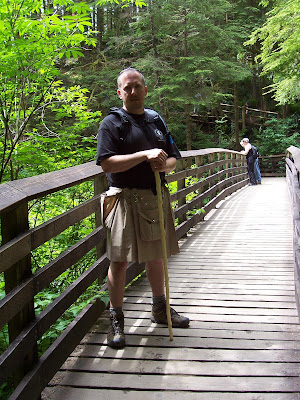 We finally arrived at Wallace Falls State Park and waited for the family and to check in to our cabins. Emptied out the car, hurried the cleaning crews along and relaxed. Barrie and Lisa were the first to arrive from Kelowna, BC with their dog Bailey. 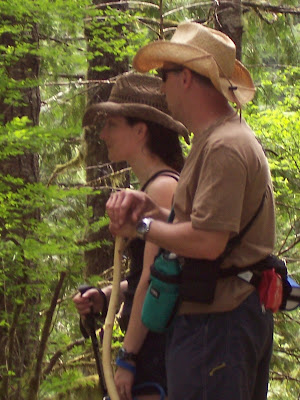 And Mavis and Chip arrived from Eastern Washington a few hours later with their dog Boomer. We all had some good food and relaxed around a great campfire. Thank you Chip for hauling the wood. It was hard to get Mavis to pose for a picture so Chip helped her out on this one. 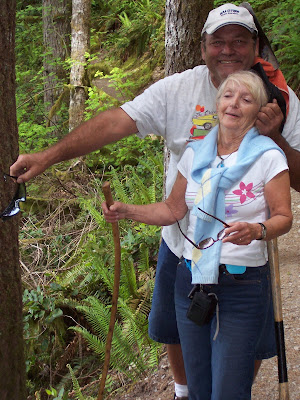 Sunday morning we got up and had a simple breakfast of bagels and muffins and started our 5.5 mile round trip hike up the falls. We made it to the middle falls. We were hoping to go to the upper falls and take the railroad grade trail to Wallace Lake but we had to be considerate of the ages of our fellow hikers. Next year, maybe we'll get there. 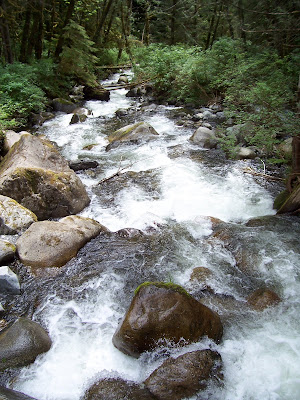 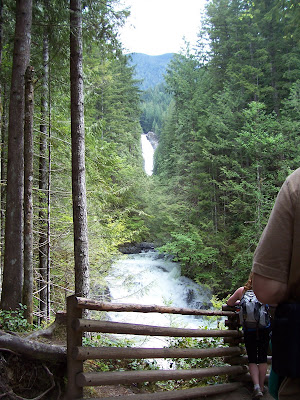 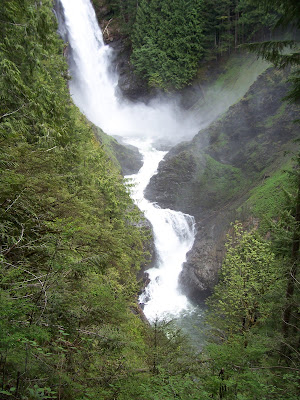 I guess since everyone else's picture is in this post I'd best put one of me in here..... 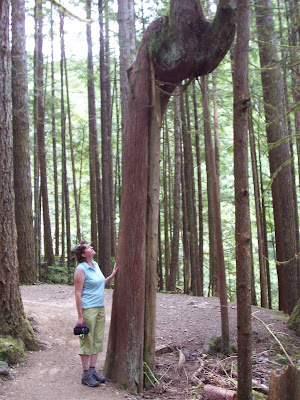 Here is an almost group picture that Troubadour took. Unfortunately we did not get one that had all 6 of us in it. 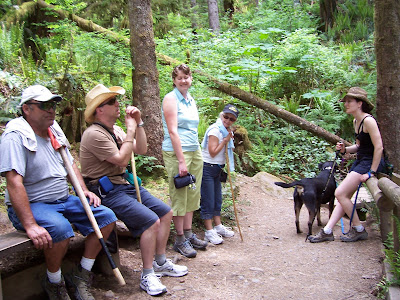 We spent a few hours out on the trail and headed back to camp for a good lunch and more lounging around. I must say I loved my Keen hiking shoes. They were perfect for the trail. Headed to bed a little earlier and got up Monday morning to start breaking camp.
Everyone headed out just after noon and we had an uneventful trip home. We made it home by 7 pm after getting stopped on I-5 by Chehalis for a rollover accident. As soon as we got to the Oregon State line it clouded over and started to rain. How rude. It has been hot and muggy every since with thunder and lightning the last few days.
We did manage to get both bikes out last night and ride to American Dream Pizza for Corvallis Bike Night. The first Wednesday of every month we all get together to talk bikes and plan rides. Yes, I rode my new bike. Too hot and muggy for my riding pants to so I got to ride home in the pouring rain at 8 pm with my Cortech jacket and blue jeans on. The good news is my boots were waterproof. I took my safety class in the rain in November so it didn't really bother me. Man were we soaked when we got home. Troubadour had on his mesh jacket so he got the worst of it. It was a great night with about 20 of us crowded around the table and hanging out.
We have a ride to the coast planned for Sunday for chowder and I pick up my new helmet in Hillsboro on Saturday so stay tuned for more pictures.
-Au Revoir
"Some national parks have long waiting lists for camping reservations. When you have to wait a year to sleep next to a tree, something is wrong." - George Carlin
Posted by Trobairitz at 9:40 PM