.
While we were resting up on Thursday after our motorcycle adventure to California we were informed about a canoe trail to the south west of us. We were thinking of taking our canoe out, as it hasn't seen water in a few years. We stopped by the office so I could drop off the mail and mentioned it to John, the other attorney in the office. He mentioned the Siltcoos Canoe Trail just south of Florence.
We came home and did a little research on the trail. And by we, I mean Troubadour was gracious enough to do the research. We decided to do it the next day, which was Friday June 12th. I assisted Troubadour in moving the canoe off of it's sawhorses, as it had been stored behind our laurel bushes under the persimmon tree. He hosed it off, scrubbed it up, put the roof racks on the car and then we hoisted it on top of our little Nissan Versa hatchback. 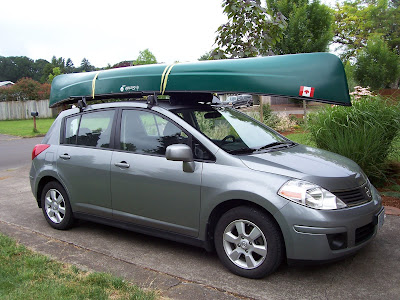 It fit like it was made for it. Very utilitarian looking. This ain't your momma's hatchback. You get the idea. It is amazing what you can do/haul with a little car and some rachet straps.
We drove the hour and a half south west to Florence. Stopped and bought a couple of veggie sandwiches to take with us. I hadn't been grocery shopping since we'd been back so there were no sammie fixings at home. Sandwiches acquired we went the additional 6 miles south to turn off to the lake.
The Siltcoos Canoe Trail starts off at the boat launch at Siltcoos Lake. The largest lake on the Oregon Coast. After launching you go 1/4 mile south and turn into the river just under a concrete bridge. After that it is 3 miles of river to the ocean. Troubadour was in the front of the canoe for the cruise to the ocean so he was manning the camera and took these great shots. 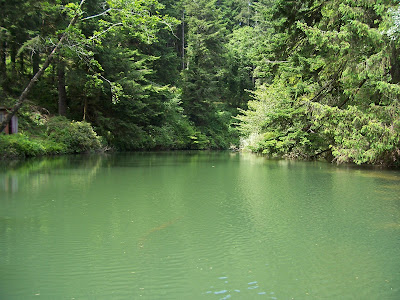 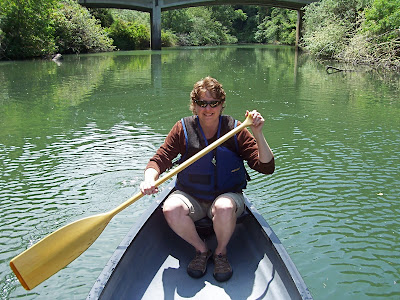 Approximately 1.5 miles down the river there is a dam to control the lake level. There is a portage built into the right side for canoeists and kayakers to use to get past the dam. Here are a few shots of the dam and portage. 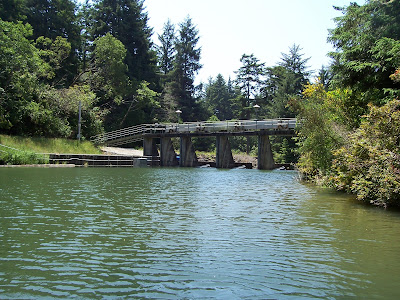 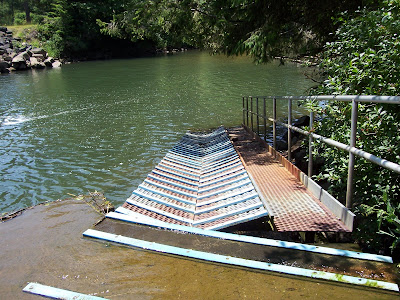 Troubadour climbed the ladder to the top of the dam for these shots...... 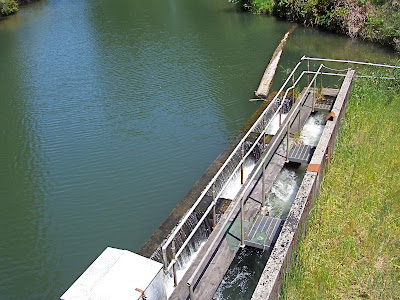 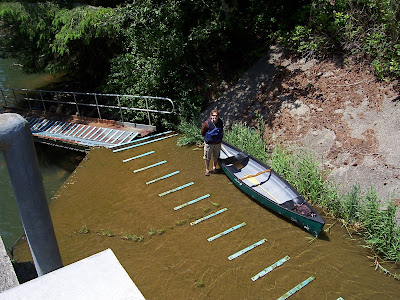 There was only supposed to be the one portage, but we caught the river at low tide and so we had two additional unexpected portages. There were fallen trees across the water that we had to climb out and over and drag the canoe over and another was a sandbar. (luckily on the way back the tide was coming in and we were able to sail over both of them, barely) This is one of those that we portaged. 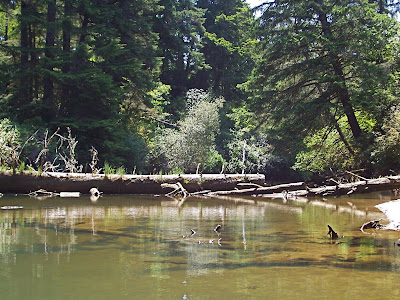 Finally the ocean was in sight. Unfortunately we couldn't put to shore right at the ocean beaches as the plover was nesting and it was a big no-no. We put in just before the ocean. The current/waves were still coming in pretty good so it was a fight the last few hundred yards. 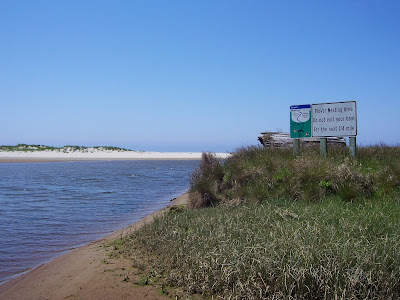 We had eaten our sandwiches for lunch at the boat launch before we set off so we took a break and had snacks of animal crackers, dried apple rings and Odwalla Bars, washed down with cool water. We looked refreshed don't we? 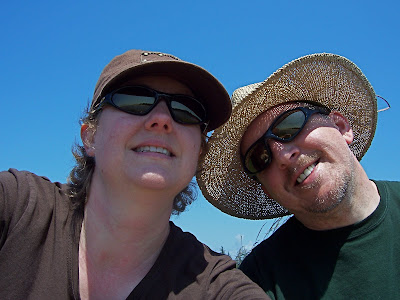 While snacking Troubadour took this awesome shot of the canoe and beach grasses: 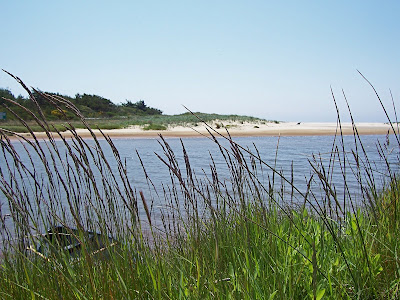 After a short rest we headed back. This time with me in the front manning the camera. 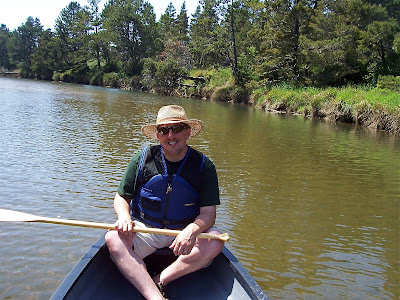 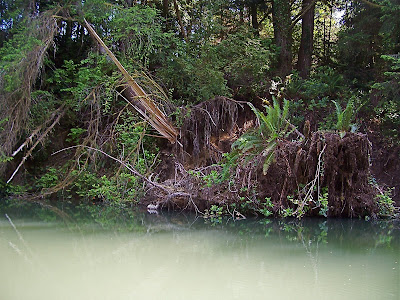 We made it back the 3 miles and just had to portage the once over the dam. At some points the wind was at our backs and helped and at others tried to blow us off course a bit. By the time we reached the lake it was just after 4 pm and the wind was really kicking up. We paddled as hard as we could that last quarter mile as not to be blown further into the lake. Man were my shoulders sore. We loaded up the gear and headed home. It was a great day and we really couldn't have asked for better weather. Nice and sunny, not too hot, not too cold. We put our sunscreen on so we didn't get burned although our arms and hands are a little darker than they were. We'll definitely be taking the canoe out again soon.
Note to self - leather Keen sandals take over 24 hours to dry. Bugger!
Au Revoir
"I believe that there is a subtle magnetism in Nature, which, if we unconsciously yield to it, will direct us aright." ~ Henry David Thoreau
Posted by Trobairitz at 3:25 PM