.
Well, most of you that read my blog probably read Troubadour's blog as well and know that we went on a short motorcycle jaunt earlier in the week. This post will be my take on things.
We had the week off (our first week off together in 15 years) and decided we should actually do something instead of staying home and working on the house, which is what we do most long weekends or extra days off. We hummed and hawed and thought about California and the redwoods. We decided Sunday night after our chowder run that we should do it. Monday was spent doing last minute errands and preparing. Troubadour did an oil change on the America and checked her brakes. We loaded our gear into the saddlebags and the tailbag and headed to bed.
Tuesday morning dawned a little chilly and overcast and we headed out about 8:30 am. Took the back roads over to Florence and stopped there for coffee and a warm up. The fingers were a little chilly and so were the toes. When stopped for road construction a few miles from Florence Troubadour was nice and let me lean forward and hold the heated grips for a few minutes. That helped.
Onward South we travelled. Stopped in Coos Bay for a fuel stop and also a quick snack of some animal crackers and water.
Again we headed South. About 10 miles north of Port Orford is Cape Blanco Lighthouse. We decided to take the 6 mile detour and see what it was all about. We were glad we did. The lighthouse was pretty neat and for the low low price of $2 each we could go to the top. Here are a few pics, I'll try not to use the same ones Troubadour did. 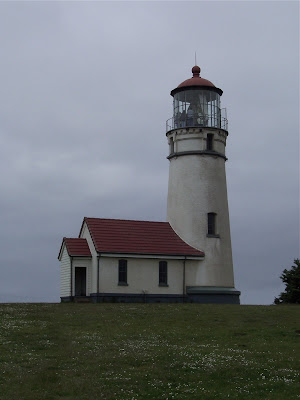 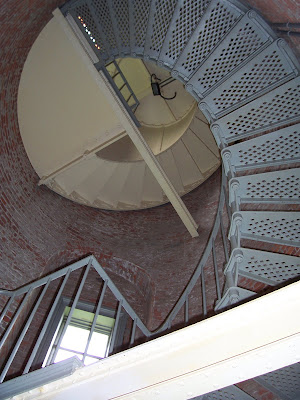 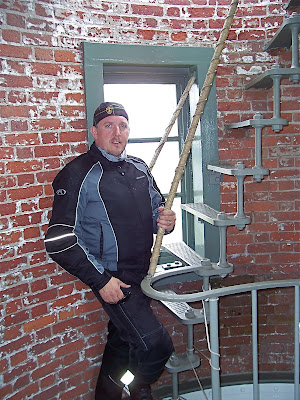 That last bit of stairs to the lens room was straight up as you can see. Easier going up than down as they were really narrow. Good job they had a railing.
One of the volunteers at the lighthouse informed us of the Hughes House that was back down the road a mile or so. She mentioned something about one of the keepers not wanting to wait to petition the government for more adequate housing so in 1898 he hired a Swedish architect and built his sweetie a 3000 sq ft Victorian Mansion out on the cape. We took the tour of that as well and it was interesting to see how it had been restored. It still had the original tile around the kitchen stove and fireplaces. Also a section of original wallpaper was found and put under glass in the master bedroom. We didn't take any pictures of the interior of the house but we did the exterior as we were heading away. 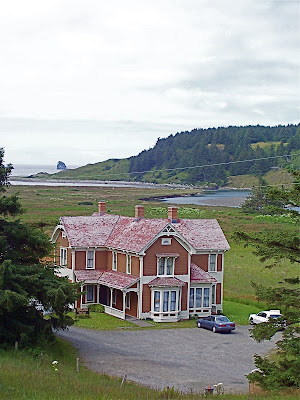 Again we headed South. Stopped in Port Orford for about half an hour and ate some sandwiches we had packed that morning. It was nice and sunny so we sat and watched the ocean while we ate. 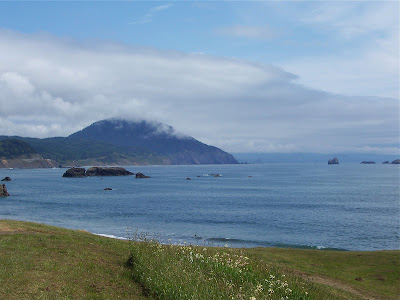 We made one more stop before crossing the state line into Cali and that was in Brookings at Dutch Bros. I tell you after a day of riding a decaf iced vanilla latte never tasted so good. 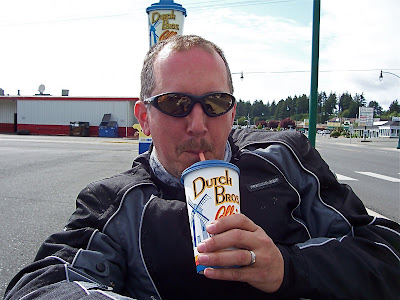 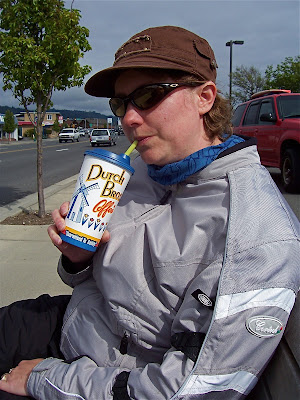 It was nice to sit in the sun and have a coffee break. We again got back on the bike and made it to Crescent City in respectable time. We were not impressed when Highway 101 turned into Freeway, but what can you do. We managed to find a nice hotel called the Lighthouse Inn. One of the only rooms available had a jacuzzi tub and gas fireplace. Oh darn. We decided to stretch our legs and walk into town to find something for dinner. We were glad to be off the bike and have our Keen sandals and comfy clothes on. After walking for an hour we decided there wasn't really anything open at about 7:30-8:00 pm that would have anything vegetarian. Of course, the standard fast food joints were open, but we didn't want that. We decided to stop at a Safeway and purchased a couple pounds of green grapes, some cheese, a few buns and some hummus. The grapes were almost gone by the time we walked back to the hotel. They were so refreshing and crunchy and hit the spot. The other treats filled the gap so we could then relax. The jacuzzi tub sure felt good on our muscles and joints after being on the bike all day. We didn't think to take any pictures of our hotel room.
Got up and ready the next day, loaded the bike and headed South towards Klamath and the Trees of Mystery. From the little bit of research I had done on the computer prior to leaving I discovered the tourist attraction and it was the one place I wanted to go and hug some trees. 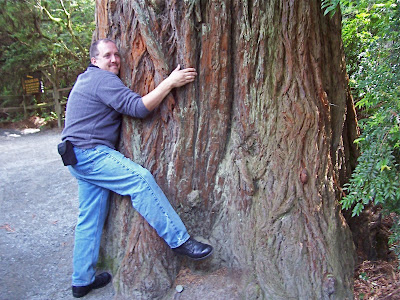 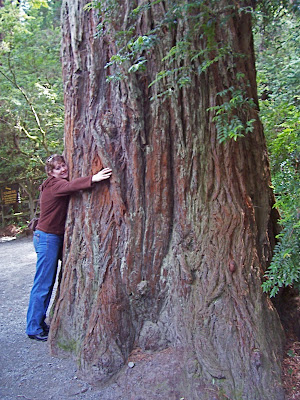 To be continued.....
-Au Revoir
"Thanks to the Interstate Highway System, it is now possible to travel across the country from coast to coast without seeing anything." - Charles Kuralt
Posted by Trobairitz at 11:20 AM