.
Yesterday I bid adieu to my little TU. We'd known since Thursday that we had a seriously interested party. A gentleman from Seattle had been riding a scooter and then took his MSF course and wanted to step up. He sold his scooter and was looking for a small bike to get around town. He'd ridden a TU as a demo and it was what he was looking for.
The catch was that he had no way to come and get the bike from Oregon. We were nice enough and borrowed a truck and delivered the bike yesterday. So begins our adventure........
I picked the truck up late Friday afternoon and we loaded the bike that evening. Saturday morning we were up at 5:00 am and out of the house just after 6:00 am and it was raining like crazy. North on I-5 we headed. We made a quick stop at a rest area and then didn't stop again until the Olympia/Tumwater region for petrol. Fuel was more expensive in Washington so we were happy to find a Costco. With Costco pricing we paid what we would have in Oregon. Luckily it happened to be close to a Starbucks. Fortitude was required to carry on after being up so early.
I took the opportunity to take a few last pics of the TU on it's way to it's new home. 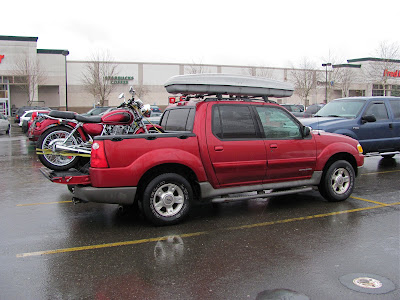 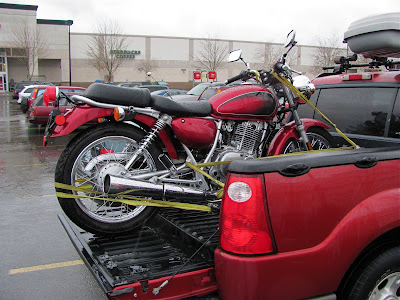 I didn't notice until looking at the pictures that you can see a Starbucks sign on the Fred Meyer building in the background. Funny because we were at an actual individual Starbucks store located behind where I was standing to take the picture. More than once we've seen a Starbucks right across from a Starbucks. Caramel Macchiatos in hand we headed off again.
About an hour later we arrived. Unloaded the bike in the pouring Pacific Northwest rain and completed our transaction. The man who bought the bike was super happy and very excited with it. I think it went to a good home. He fit the retro image of the bike perfectly.
By this time it was noon and we were hungry. Checked the GPS for restaurants in the area and saw a vegetarian Thai restaurant. Found parking around the corner. I swear in the area of Seattle that we were in, that little truck was the biggest vehicle around. Parking was scarce and roads were narrow. There were some really cool older homes though with lots of character. Unfortunately the Thai restaurant was closed. (damn GPS doesn't give you hours of operation) This turned out to be a good thing.
When we had initially gotten out of the truck I noticed an organic Indian food restaurant across the street. Turns out they were open and had a weekend brunch buffet. It was some of the best Indian food I've ever eaten. When you are vegetarian in an unfamiliar town and looking to eat, you can't go wrong with Indian food. They have so many veggie dishes. The restaurant was called Chutney Bistro. Very nice. It was good to have some new flavors compared to the two Indian restaurants we have here in Corvallis.
As we were eating Troubadour mentioned that we left the camera in the truck. Doh! A little bird told me recently that a pocket camera was to be kept in the pocket, you know, ready to use at a moments notice. Unfortunately we don't have pockets big enough for the Canon. I think we'll have to invest in an actual pocket camera small enough to fit in a pocket or my minuscule purse.
We realized the restaurant was in an old school. It was the Interlake Public School which has been transformed into a little shopping complex called Wallingford Center. Two floors of shops and the waitress told us there were apartments upstairs. We would have liked to take some pictures of the interior decor, but did not go back in. I did manage to take a few pictures of the exterior once we returned to the truck. 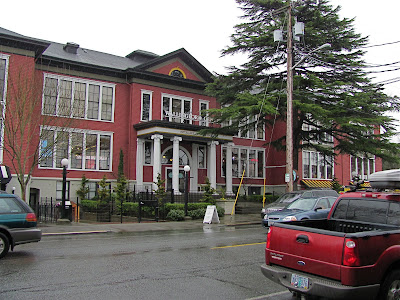 The yellow striped awning you can just see at the bottom right corner of the above picture indicates where Chutney Bistro was located. They were in the basement area. 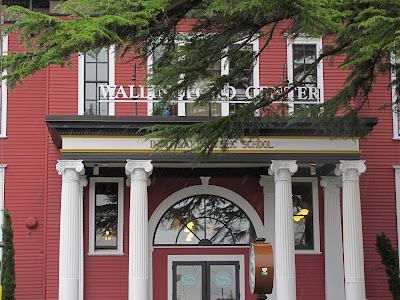 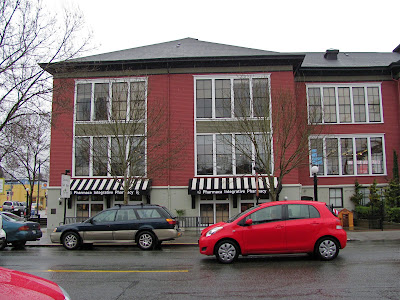 Sufficiently full we headed South. We stopped at Eagle Leather in Tacoma and wandered around for a bit. They had their Fulmer helmets on 20% off. I managed to find an XS helmet that fit pretty well. It doesn't come down as far on my neck/shoulders as my Scorpion. Will be easier for shoulder checking I think. The helmet is not the orange and white reflective one I had mentioned in a earlier post. It a reflective white and black/grey one that is similar. It is not a modular but has the reflective properties I wanted. I was a happy camper. It is Fulmer D5 Flamethower Shaman II. They have a picture of it on their website I pilfered. 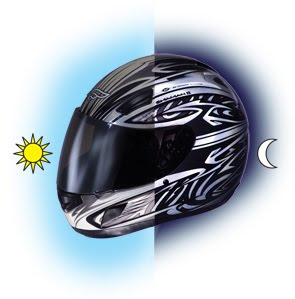 From there we headed a bit further down the road to Triumph of Tacoma. The workers in there were all very friendly and we wandered a bit and Troubadour checked out the Sidi boots. They didn't have the right size for the ones he is wanting though. Sad panda. Time to head home. Back in the truck and onto I-5 South.
We stopped in Wilsonville for petrol and then at Sushi Kyo in Salem for dinner. We finally made it home about 8:00 last night. It was a really long day but worth it so that the TU went to a good home.
On a side note, Friday was a nice sunny day here in the valley and Troubadour stopped on his way home from work and took a few pictures of the Gladius for me. He is so good to me. Here is a sample. 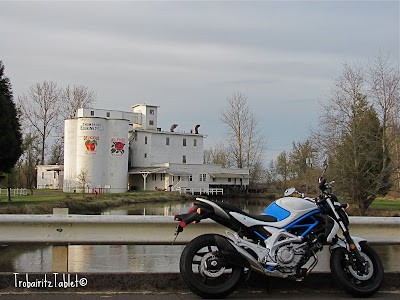 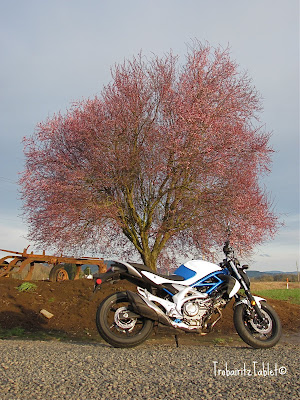 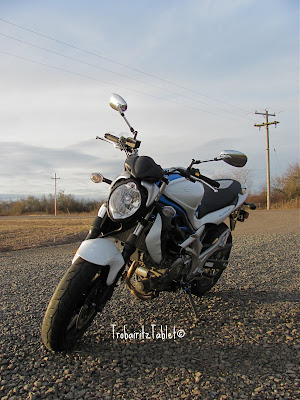 - Au Revoir
"It's spring fever. That is what the name of it is. And when you've got it, you want - oh, you don't quite know what it is you do want, but it just fairly makes your heart ache, you want it so!" ~ Mark Twain
.
Posted by Trobairitz at 9:10 AM