Again With the March Madness....

But wait, there's more..... we'd had enough of our Nissan Versa (which was purchased in March 2007) and the gremlins needing to be fixed so last Sunday we traded it in for a 2011 Subaru Forester. Now we will be able to not only tow a trailer, but haul more as well. One of the things we didn't like about the Versa is that it wasn't rated for towing. When we bought it we had Troubadour's pickup truck. We sold it a few months later since he was only riding his motorcycle and the truck had turned into a lawn ornament. When the Versa became our only 4-wheeled transportation we realized it wasn't as versatile as we'd like. The Versa was paid off and it was nice not to have a car payment but it was time for a change.
The Forester is much more utilitarian. So far we are loving it. Of course the AWD, panoramic moonroof, and heated seats and mirrors help with that too. 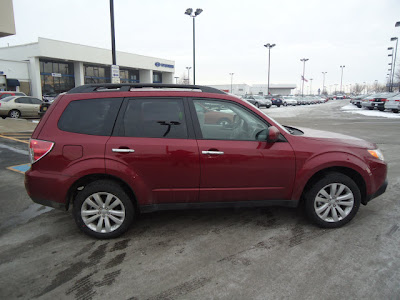 This was a random picture found on the net but it is the same year and color (Camellia red pearl) as the one we purchased. It has been too dark and rainy to take any pictures of our car. I hear we are supposed to get sunshine on Sunday.
On Wednesday the new slip on exhaust was delivered for Max. It is a stainless steel IXIL Hyperflow purchased from indysuperbikes.com. 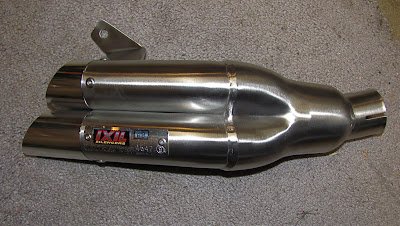 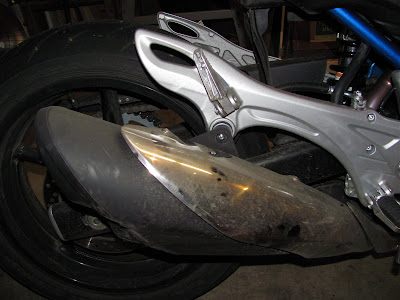 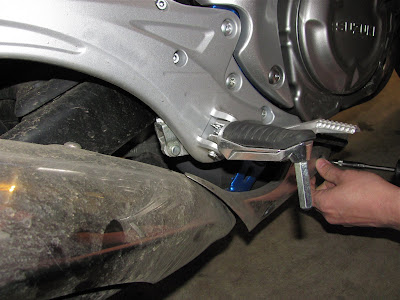 (What's up with those stock peg feelers?)
As you can tell, the bike is really dirty right now from commuting with Troubadour these last two weeks.
With the stock exhaust off it was time for another pic. 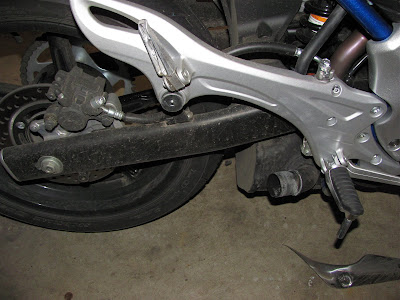 I slipped on the new exhaust and troubadour tightened up the clamp for me. 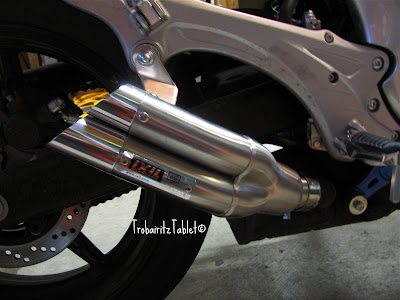 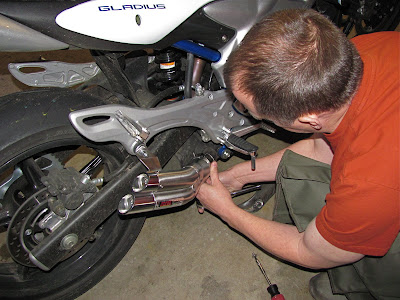 (Don't all men wear kilts when working on motorcycles?)
I held up the stock exhaust just to see the difference in size. I wish I would have put them on the floor side by side for reference but this will have to do. 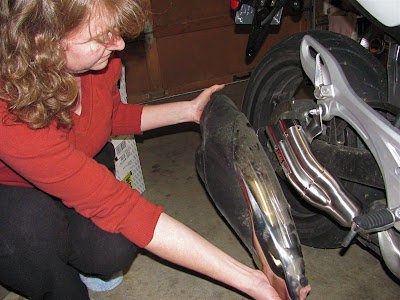 We started it up and I am really happy with the sound. It isn't an obnoxious over loud rumble like you might find on some cruisers, but instead is more of a 'something stuck in your throat' growl. Almost gutteral, but not quite. Troubadour's Tiger has an off-road exhaust on it and it is like a big cat's growl. The Gladius is like a kitten in it's imitation of the growl, but I like it.
We're still waiting for a switch housing to hook up the heated grips. We ordered one online but the company sent a new model so instead of a nice black switch it was a large fugly red standing in stark contrast against the bike like a kill switch. That was returned and a new one is on the way. If only we could have found something locally.
If it is sunny on Sunday I am hoping to take Max out to get some pictures of the whole bike with the new exhaust on it, but for now a few more from last Friday..... 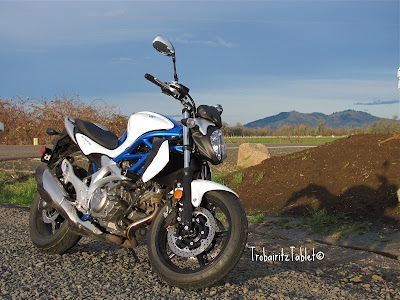 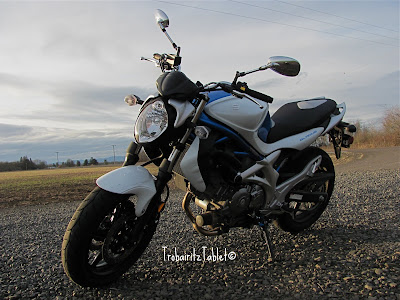 "Anyone who lives within their means suffers from a lack of imagination." ~ Oscar Wilde
.
Posted by Trobairitz at 11:05 PM