I have come to the conclusion that Oregon has only two seasons: wet and dry. The dry season lasts 3 months - July, August and September. The wet season however, lasts the other 9 months. Ick blah.
Needless to say I haven't been doing much riding lately. We did ride to coffee last Saturday which was nice, makes 3 times I've been out on Max and the first time with the hand guards. I had to turn my grip heaters down on the way home as they were too warm, that was a good feeling. 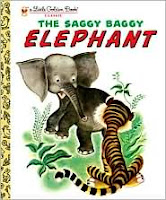 On the ride home I also realized my winter riding pants are so large I think they are becoming a hazard. I was hoping they would last until it is warm enough to wear my mesh, but I don't think so. They were sightly large when I purchased them about 18 months ago, but recently I have lost about 15 pounds and they are way too loose now and I feel like the saggy baggy elephant wearing them. Unfortunately when I buy pants with long enough legs they usually start out a little on the loose side up top. I could deal with baggy drawers on the TU because of how flat the seat was, but with the forward lean angle of the seat on Max if I do any kind of abrupt braking I slide inside the pants so far forward and into the tank that I feel unstable and unsafe. Not a good thing. More gear shopping, oh joy. At least I have it narrowed down to either REV'IT, to go with my jacket or Aerostich since Troubadour loves his so much.
Saturday afternoon Troubadour was taking the America down to the Triumph dealer in Eugene to put it on consignment and I opted not to ride, as we would have had to return two up on the Gladius. Two up on Max would have been doable but not necessarily comfortable for an hour ride.
He did have a riding buddy with him though, our good friend Jim, who also owns a Tiger, rode down with him and I followed later in the car.
Rod was busy which was good to see. You always want your favorite shop to be bustling, keeps them in business. Since Troubadour rode down he had all of his riding gear and the new Tiger 800 was calling him like a beautiful siren luring an unsuspecting sailor to doom. He heard the call and answered it with smirk and proceeded to steer straight into the reef. I'll let him describe his test ride, as it is his tale to tell. I can tell you that his smile lasted for hours and outshone the sun. 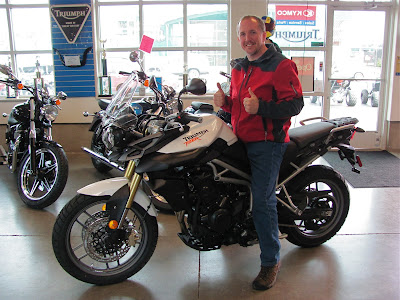 (taken on our first visit to see the new Tiger)
We were at the shop for a few hours and then had lunch at Laughing Planet Cafe. We wanted to try it out as one will be opening here in Corvallis in May and they have quite a vegetarian menu. We were not disappointed.

The weather wasn't great on Sunday so we just puttered around the house and ran a few errands. Back to work on Monday and the weather has been a mixed bag of tricks since. Raining one minute, hail and sleet the next interspersed with some sunshine. Sometimes rain and sun at the same time. Mother nature is definitely in her bi-polar phase.
The forecast for the coming week is more of the same. Right now the weekend looks dry and we are hoping to go for a ride and get some yard work done. I don't think I'll hold my breath.
- Au Revoir