.
When you cross 'function' with 'sparkles'? FARKLES
Or at least that is where I like to believe the word came from. I decided to look it up on Urban Dictionary. Sure enough the first definition is exactly that. It must have been an easy one, if I guessed it right off. It also give the definition as an acronym for Fancy Accessory Really Kool Likely Expensive. Hadn't heard that one before.
I bring this up because I've added a few more farkles to Max.
First the function......Okay, they sparkle a bit too. We added aluminium spools and bought a rear stand. Will be much easier for cleaning the chain. 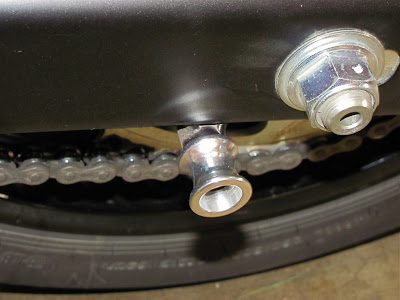 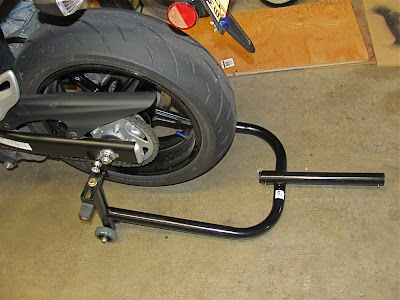 Little bit more function..... we finally installed the Fenda Extenda purchased from Pyramid. I think it will really help keep the road grime off the engine, oil filter and exhaust. It went on quite easy, 4 bolts removed and the fender was off. We (and by we I mean Troubadour) used the double sided tape that came with it and he was smart and used a little leftover super duper silicone from when we installed the exhaust venting on the pellet stove. We know that stuff sticks. Left it all day and it was quite secure. Reinstalled the fender and voila. 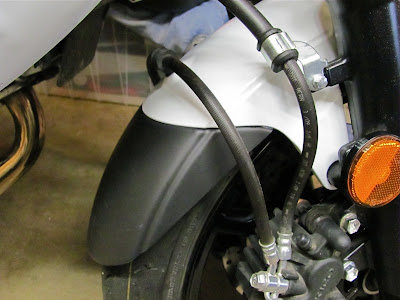 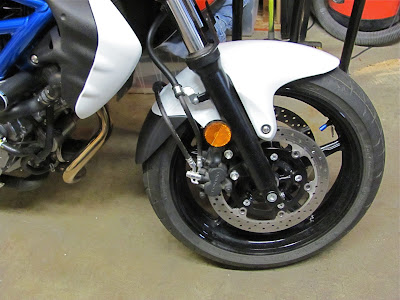 We had the choice of black or black but at least you can see how much more coverage it will give and how small the original fender was.

And now for gratuitous sparkles..... 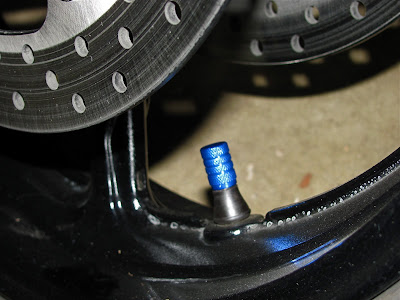 While at Harbor Freight this last week I picked up some blue valve stem caps. They were on clearance and by far the cheapest farkle added to the bike. A little bling for Max, I couldn't resist.
We also have blue reflective wheel tape on order from Discount Motorcycle Parts. We were there last Saturday and Steve said he'd order it. Not sure how they did it, but it was already in on Tuesday. One of these days we'll have to sneak down and pick it up.
Looks like the sun has finally decided to peek out from the clouds. Must be time to have some breakfast and think about a ride.
- Au Revoir
"My problem lies in reconciling my gross habits with my net income." ~ Errol Flynn
.
Posted by Trobairitz at 8:00 AM