.
I think we've put the last farkle on Max. Or at least the last farkle for a while.
While in Eugene two weeks ago we ordered some reflective blue wheel tape from Discount Motorcycle Parts. It arrived promptly but we had a hard time trying to find the time to go back down and pick it up. RickRick happened to be in Eugene on Saturday and graciously agreed to make the stop and pick it up for us. Thanks Rick.
Once we saw the kit we were amazed that the color matched the frame and tank of the bike so well. Because it was a special order the color blue was sight unseen until it was delivered. These pics of the pkg and roll of tape were taken after the install so it there isn't much tape left on the roll. 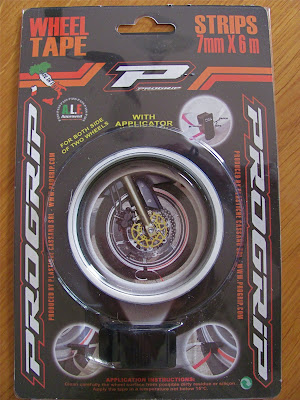 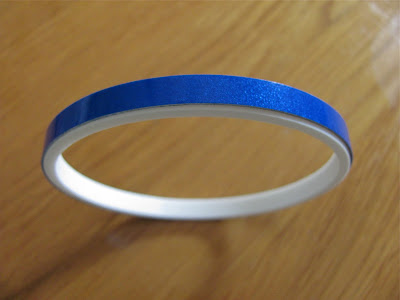 Saturday night we (yes, I mean Troubadour - sorry you don't have a 'we' Bobskoot) decided to apply the tape.
Actually as I was making dinner Troubadour was puttering around in the garage and before I knew it he had the rear wheel on the paddock stand and had one side done already. After dinner. I sat on the bike and rolled the bike forward and back as needed while he applied the tape to the front wheel. (no front stand)
Here are a few pictures: 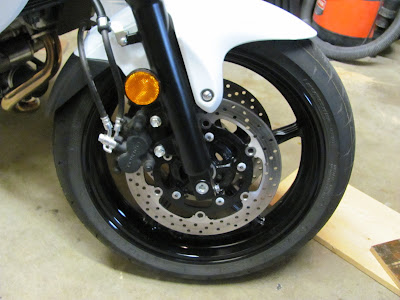 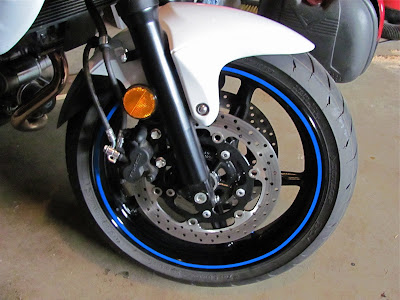 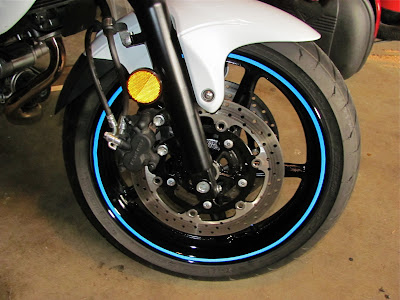 (with flash to show reflective properties)
I neglected to get a picture of the rear tire before tape. Here is a picture with tape. I made sure to get some of the frame in these shots so you can see the color match. 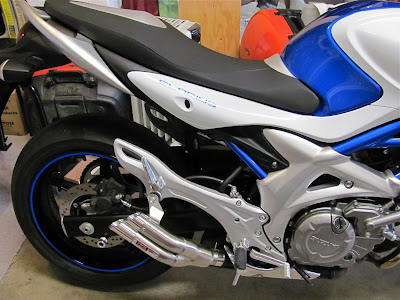 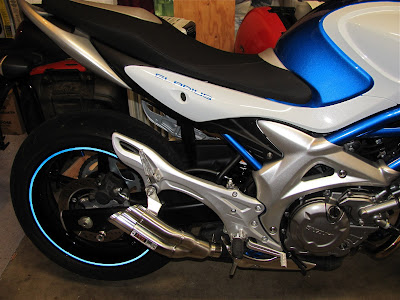 (with flash)
Will be nice to go out this weekend and get a picture of the whole bike with all of its farkles.
There are a few things I have seen others do on the forums but I don't know if it would be too much blue on Max. For now I shall ponder it and share some pictures of the ideas I like. The following pictures were pilfered from the SV/Gladius forum. 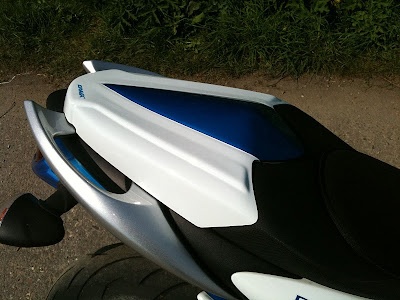 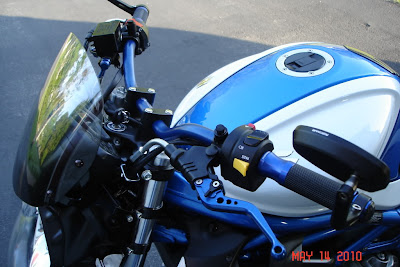 (Rizoma bars and levers)
I have also seen where owners are removing the plastic side covers and exposing the blue frame like a Ducati Monster. No the following picture isn't Max, just someone that has the same hand guards and has added a small fly screen. It does give you an idea of what the bike looks like without the side covers though. 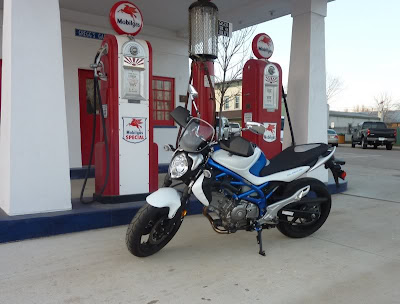 (Side covers removed)
For now I am happy with the way Max looks and have found a nice combination of function with the grip heaters, hand guards, frame sliders, and front fenda extenda and a little bling with the IXIL slip on exhaust, wheel tape and valve stem caps.
I hear rumors of a sunny weekend and even 74˚F for Sunday. We shall see.

"There are no grades of vanity, there are only grades of ability in concealing it." ~ Mark Twain, Notebook, 1898
.
Posted by Trobairitz at 10:50 AM