A Bike a Day For Seven Days

.
A week or so ago Dar from Princess Scooterpie fame commented on one of my blog posts and said "I wish I had extra cashola, I would have a bike for every day of the week!" This comment got me thinking...... if I was wealthy and could have seven bikes, one for each day of the week, what bikes would I choose.

At first I thought I'd have a hard time coming up with seven, but once I started thinking about it, it was difficult to narrow it down to just seven. Maybe using a fortnight would have been easier.

Here are my seven in no particular order:

1. TRIUMPH TIGER 800. I have yet to test ride one. Based on comfort and how light and balanced it felt when I did sit on it, and Troubadour's huge grin after riding one I'd say it would be at the top of my list, even a list in no particular order. I think it would eat up the forestry roads and be much more comfortable for that type of riding than my Gladius. 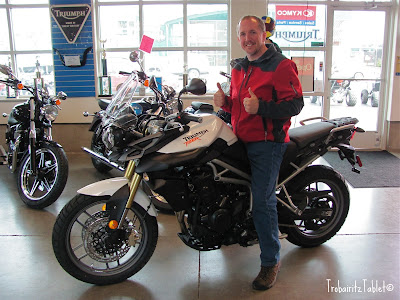 (Troubadour's first 'in person' viewing of the Tiger 800)

2. SUZUKI GLADIUS SFV 650. Of course I had to keep this one on the list. A great little v-twin. Light and nimble and easy to ride. Peppy too. 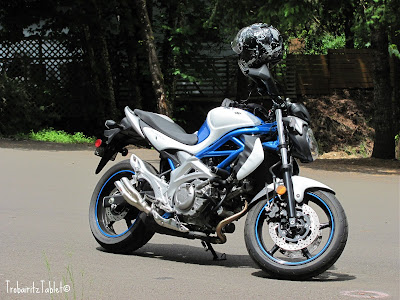 (Max basking in the sun)

3. PIAGGIO MP3 500 et al. Since I first saw these machines in a magazine several years ago they've fascinated me. In comparison to a traditional two-wheeled motorcycle the price seems a little high, but fun factor seems to be way up there too. I think they would be good for lazy days when I want to ride, but having an automatic and built-in storage would be nice. 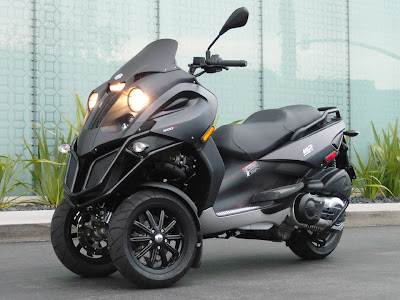 Until I was looking for a stock photo online, I didn't know that you could stoppie an MP3. 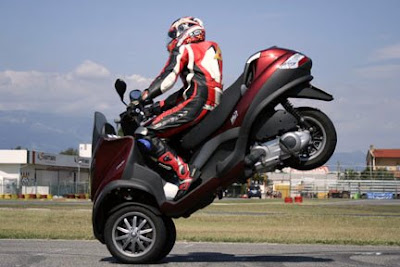 A Hybrid MP3 would be a great alternative. Perfect for commuting. Love the color scheme. 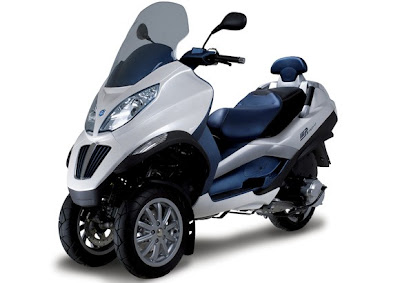 4. DUCATI MONSTER 696. I really debated one of these prior to buying the Gladius, but I was concerned with maintenance costs. The ergonomics are a little sportier too, but I think it would be a hoot to have it in the garage at my beck and call when the twisties are whispering my name. 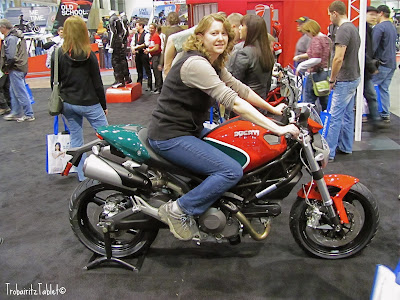 5. HARLEY DAVIDSON XR 1200. One of the only Harley Davidson models in which I truly love the styling. When we were looking at bikes prior to buying the Gladius a salesman in the Portland area told me it would be a great starter bike for me. As a starter, no. I had about 3500 miles on two wheels at that point. Would be neat to have one in the stable now though. 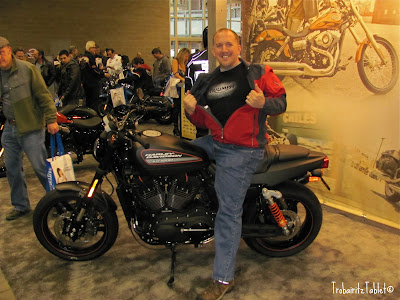 6. CAN AM SPYDER. 'nuff said. Sure it costs as much as our Subaru, but the comfort for long distances and the grin factor would be awesome. 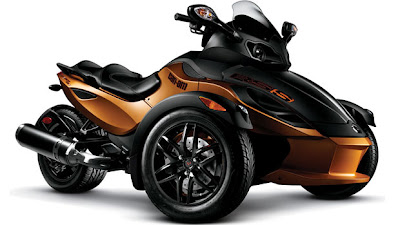 7. TRIUMPH BONNEVILLE SE 865 cc. A Bonneville was on my short list before I bought the TU 250 and before purchasing the Gladius too. I've test ridden one a short distance and enjoyed it. Now that I have more miles under my belt it would be cool to take one out again. A good thing to have in the garage for when I want an upright, but comfortable ride for just cruising around. 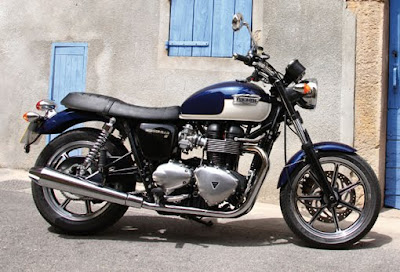 I know it is a fairly generic list and not very exciting. No vintage bikes and no stand outs. I am sure if funds were unlimited the list would be longer and there would be some vintage Triumph's on there for sure, among others. Just remember as a woman I can change my mind. This is the list today, but that doesn't mean it will be the list next month or even next week.

So, what are your seven?
* * * * * * *
Where would I house these harbingers of chuckles and grins? If funds were unlimited I would have to say I'd buy a parcel of property in the country 5 to 10 acres or more. On it I would build my dream house. A large garage with modest living quarters above it. The heat from the garage would keep the floor of the house warm and we've always said we need a bigger garage than we do a house.

In searching for a picture to show what I mean I saw these plans online. 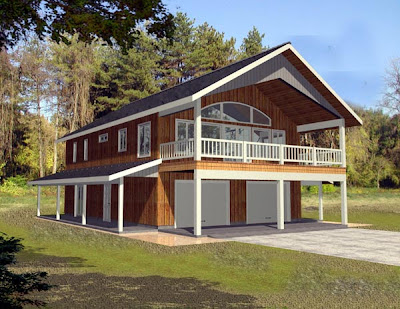 The garage is just under 700 square feet, but I think I'd make the main level bonus room smaller so that the garage would be larger. The living quarters upstairs are larger than we need and what we are currently in, but I think I could handle it.

" The best reason for having dreams is that in dreams no reasons are necessary." ~ Ashleigh Brilliant
.
Posted by Trobairitz at 2:10 PM