.
Last Sunday, Troubadour and I tried to figure out what we should do for the day. We thought about taking the motorcycles out, but couldn't predict what the weather was going to be like and also didn't have a destination in mind.

We decided that since we hadn't taken our bicycles out of the garage this year, we would ride them downtown and have a late breakfast of a pecan sticky bun at New Morning Bakery.

We suited up in warm clothes; long underwear under our jeans, extra warm socks, layered shirts and jackets and found our gloves. You'd think it was as cold as Richard was experiencing instead of the 46˚F it actually was.

Troubadour then got the bikes down off the ceiling hooks in the garage, we gave them a quick wipe down and he started up the air compressor and made sure the tires were inflated properly. By the time we left it was after 11 am.

We headed north towards the fairgrounds and the start of Campus Way. Campus Way is a multi-use path that runs through the Oregon State University Research Fields from 53rd Street to 35th Street on the west side of campus. It is the safest way for bicyclists or pedestrians to get from the west side of Corvallis to campus and beyond campus to downtown.

We pass fields of llamas and sheep as well as the back side of the OSU Research Dairy. We were hungry and didn't stop to take pictures of the animals.

Part way along the path is the Irish Bend Covered Bridge. 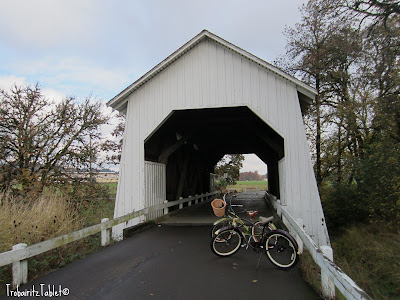 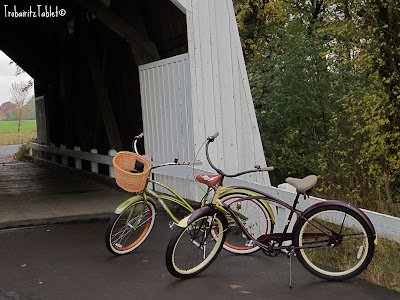 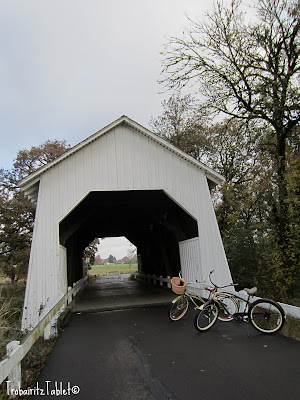 Originally built in 1954 to span the Willamette Slough by Monroe. In 1975 Irish Bend Road was rerouted and the bridge fell into disrepair. In 1979 the bridge was added to the National Register of Historic Places. It was eventually dismantled in 1988. Through negotiations with Benton County and Oregon State University an agreement was reached to reconstruct the bridge on OSU property. This was completed in 1989.

From there we continued along the path and cut through campus into downtown Corvallis. The roads we took pretty much landed us at my work. A good place to store the bikes without having to lock them up outside.
We stored the bikes inside, used the facilities and walked a few blocks to the bakery. We each ordered a pecan sticky bun and a coffee. I realized I had left my camera in the basket of my bike. Doh! No food porn pictures to be had. The buns and coffee were tasty and because the sun had decided to come out and play we decided to wander a bit downtown. We went into several local bicycle shops and looked at what they had.

We walked back to the office to retrieve the bikes and set off towards home. There is a bit of an incline when heading west through campus. This was really noticed when only having three gears.

We made a few stops for pictures on campus. The first was at some structures made of willow branches. There was no plaque to tell us about the project or the who, what, when, and why they were there. It looked as though the branches were stuck in the ground and some of the branches were green. 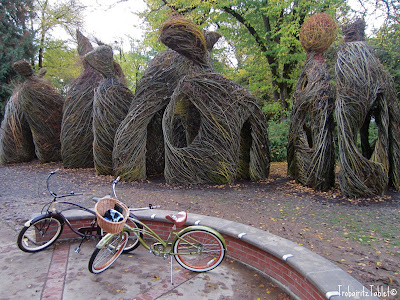 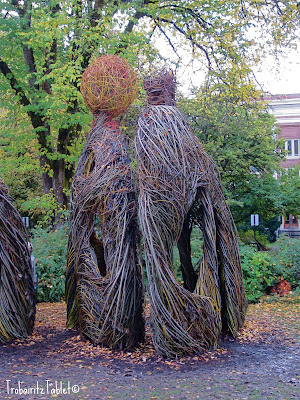 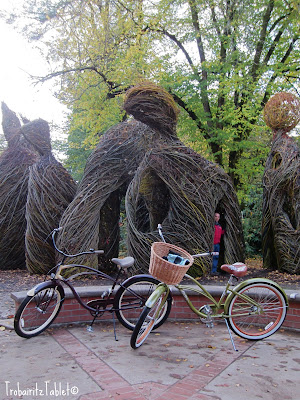 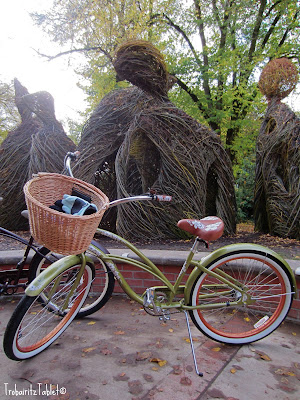 We rode around campus a little more only stopping to take a picture of the Memorial Union Quad. The Oregon State University Memorial Union was the first student union in the state. 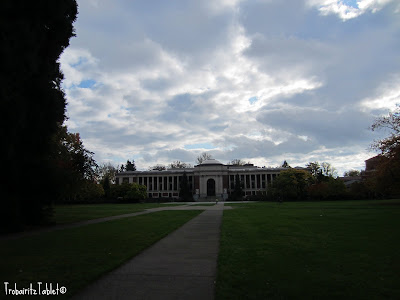 Here is a link (<---- click) to the quad's webcam for a better view. The bottom of the page also has interesting webcams placed around OSU's campus and even their marine research facilities at the coast.

While riding home we realized we were not that enthused with our bicycles even if they are rather retro and funky looking. The few times we've ridden them, since we bought them a few years ago, we've enjoyed them but they aren't as multi-use as we'd like them to be. Three speeds is not quite enough and the coaster brakes are no match for actual brakes. It has us thinking about selling or trading them in. I wonder if we'd ride them more if they were a bit more functional.

Naaa..... I think I'd rather take Max. Maybe I'm just getting lazy wanting an engine to propel me, but I feel more stable and safer on Max that I did on the bicycle.
- Au Revoir

"Life is like riding a bicycle - in order to keep your balance, you must keep moving." ~ Albert Einstein
.
Posted by Trobairitz at 7:55 AM