.
Sunday started out a little on the chilly and cloudy side. The temperatures were in the low 40's but it wasn't raining. Perfect weather to try out the new Tour Master Synergy Heated Jacket Liner that Troubadour bought for me on Saturday. The jacket liner has heating coils in the sleeves, front, back and even the collar. 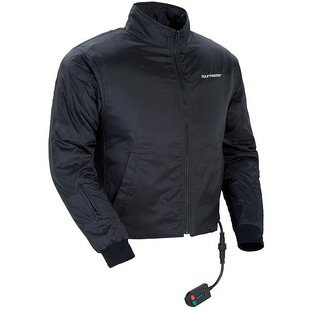 On Saturday we were at Discount Motorcycle Parts in Eugene looking at all the farkles and goodies they'd received since we last visited the shop. They had a display of this years heated jacket liners as well as leftovers from last year. Troubadour has been trying to talk me into purchasing a heated jacket liner since he bought his two years ago. I'd resisted until we noticed on Saturday that this year they changed the heat controller to a dual controller like the ones that Gerbings uses, and I've not heard good things about the reliability of Gerbings controllers. The new ones also have two knobs rather than push buttons. Hard to use with winter gloves on.

This prompted me to agree to purchase one now, as to avoid a newer one with the new controller later. I don't know if they make them in ladies sizes, but they only had men's in stock. I finally decided on the men's extra small. Not too snug of a fit and the arms were long enough - hooray.

Troubadour hooked up the radios, made sure the plug for the jacket was out from under my seat and readied the bikes. Next came suiting up for a chilly ride, which requires a bit more thought to the layers. What I wore included the following: Under Armor knee-high snowboard socks, peel and stick disposable heated insoles, riding boots, yoga pants, Rev'it Sand pants with rain liner and quilted liner, long sleeved t-shirt, heated jacket liner, Rev'it Siren Jacket with rain liner, Columbia polar buff for my neck and Fieldsheer Aqua sport gloves. I felt a little like a kid wearing a snow suit all bundled up and hard to move. However, when I was on the bike it was easy to maneuver and not restricting.

I did notice after 30 or so miles that the controller for the jacket liner had come loose off the velcro strap on my leg and was hanging. I had trouble cinching the velcro up tight enough. The section of hook and loops were not spaced back far enough that they could be done up any smaller. Therefore it was loose on my leg and the controller clip didn't want to stay put. As I was re-clipping it one handed while riding (not recommended) I inadvertently turned it on. Up to this point I didn't feel cold so I hadn't bothered to try it out. It wasn't until my back started to warm up that I glanced down and realized that I had turned it on to medium while re-hooking the controller. I clicked it down to low and left it on.

Wow. It was a like a hug from a warm snuggly blanket while riding. As much as I resisted purchasing a heated jacket liner I can't say that I regret it. I left it on the rest of the day. It was like the heated seats in our Subaru. Nice on a chilly day.

We headed South and stopped in Veneta for a photo op. We have a QWERTY game on our local forum - a city for each letter of the alphabet in order, and the next city needed was a V. 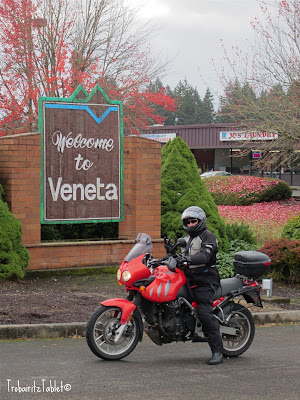 We stopped for petrol at a Shell station in Veneta. (Paid $3.83/gallon for regular) While Troubadour was in using the facilities I saw that Mr. Happy matched the colors of Shell and snapped a photo. 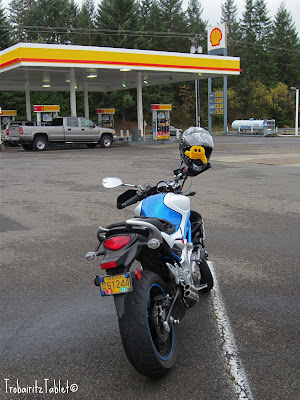 From Veneta we headed west on Highway 126 towards the coast. After V comes W so we stopped in Walton for the next picture. The same forum member cannot get two letters in a row so Max was the subject for W. 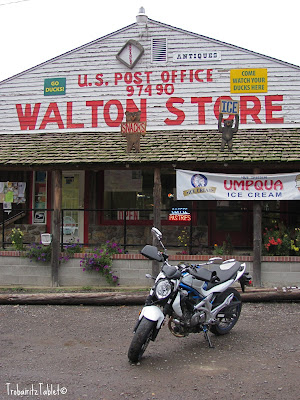 From Walton we decided to head towards the coast as far as Mapleton and turn onto Highway 36 and make a loop.

Turned right at Mapleton and headed down the back country twisties. At Triangle Lake we pulled over to use the facilities and make a spot of tea with the Jetboil. I used the time while the water was heating to take a few pictures. 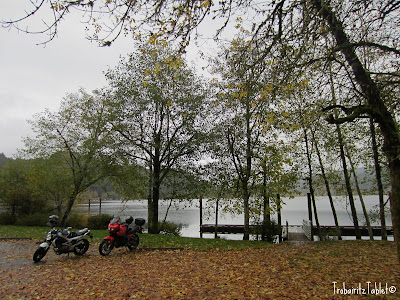 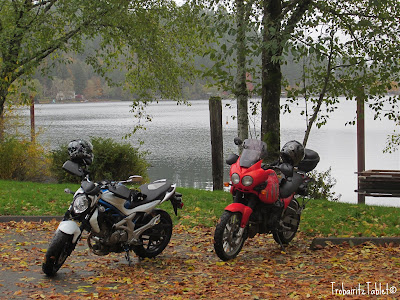 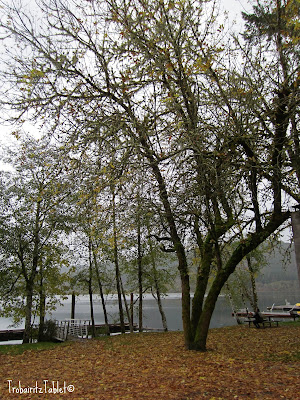 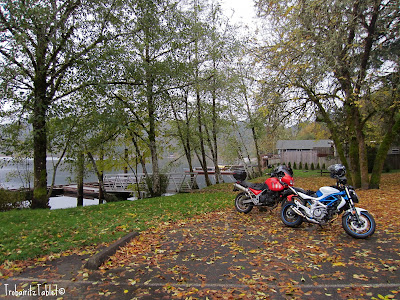 I thought about taking a picture of all the leaves on the ground and opted for a boot shot. I was thinking of Bobskoot and how he likes to have pictures of feet. Sorry Bobskoot, my feet are hidden in my boots. 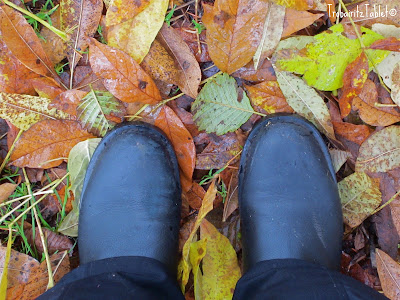 And one without the zoom. Any wonder it is hard to find riding pants long enough - my pants are a men's tall and they are just barely long enough. This shot is only from the knees down. 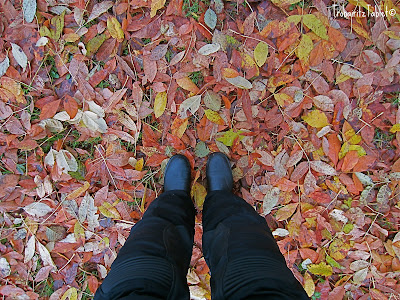 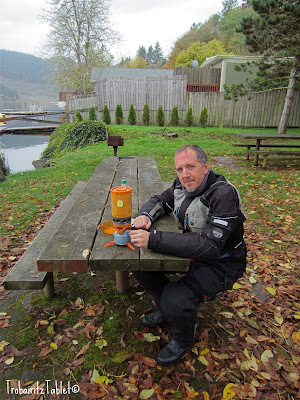 After warming my hands up on the cup of tea I decided to wander and take a few more pictures of the scenery. 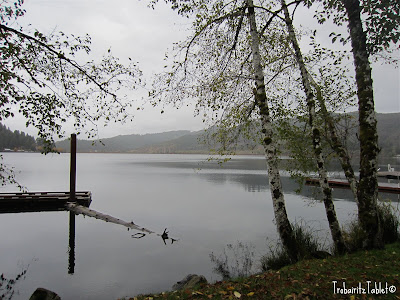 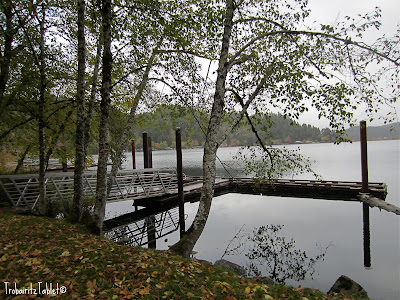 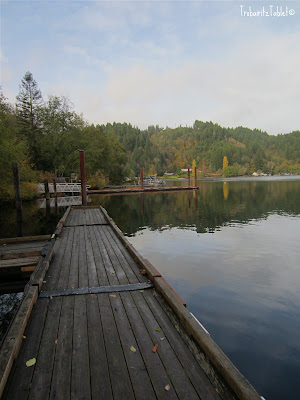 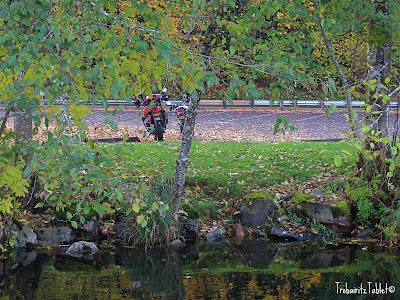 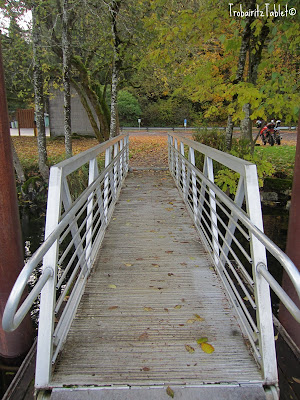 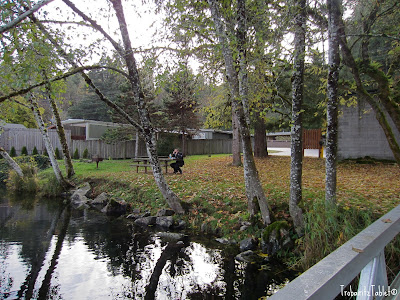 In that last shot you will notice that while I was out on the dock taking pictures, Troubadour was sitting at the picnic table, also taking pictures. He decided not to blog about the day, but gave me permission to share his photographs. I started as the photographer, then I became the subject. 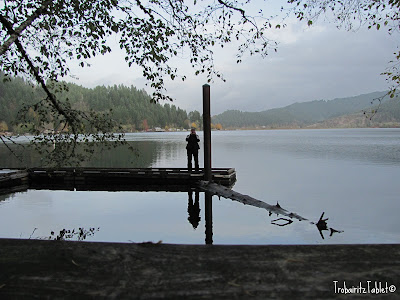 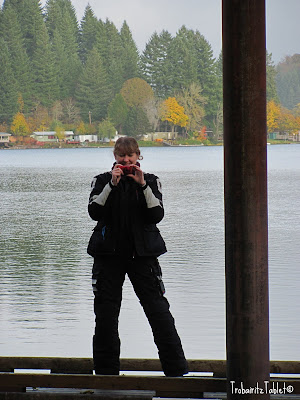 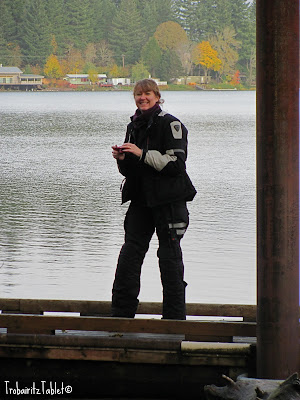 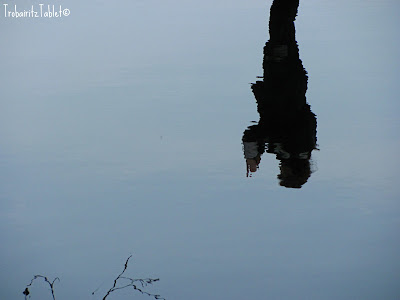 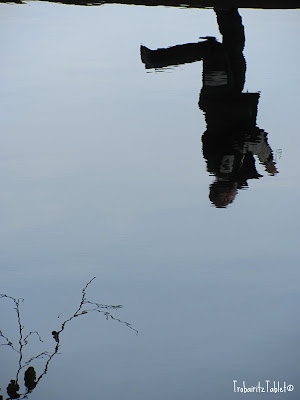 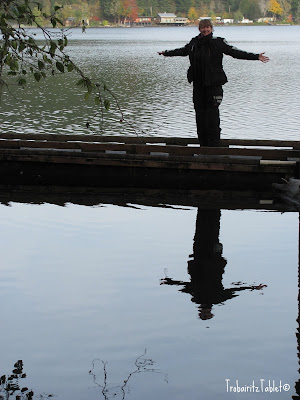 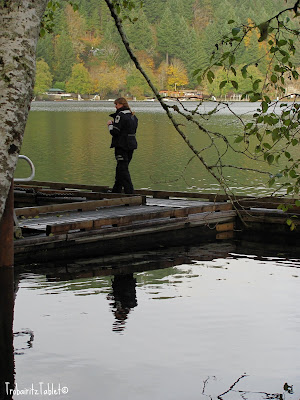 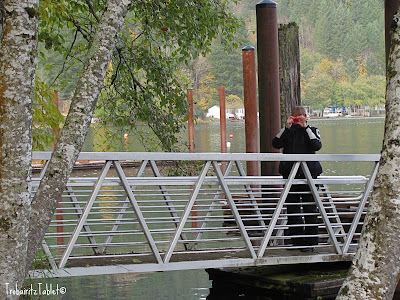 And I'll end with one of my favorite shots of the day. This is the last picture I took on Sunday before we packed up and rode straight for home. It just sums up an awesome afternoon out riding in the crisp autumn air. 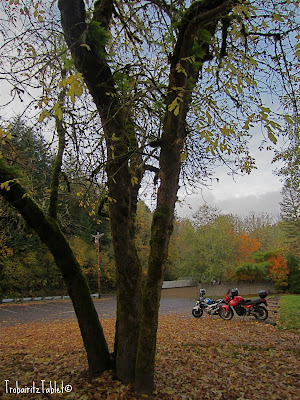 "No spring nor summer beauty hath such grace as I have seen in one autumnal face." ~ John Donne
.
Posted by Trobairitz at 8:50 AM