.
We planned on going to the Portland Metro area today to look at motorcycles. The question was, should we ride two up on the Tiger and then if we found a new bike for me I could ride it home, or should we take the car and put gear in the trunk, just in case.
One look at the evergreen trees swaying in the breeze in the back yard and how low the snow levels were had us voting for option two. The car it was.
We went to Saturday morning coffee to meet the crew. There were eleven of us and one even rode up from Eugene just to have coffee with the group. Brrr. We stayed a little later than anticipated and headed out about 11:30. With a cold wind blowing from the East we were glad we opted for the car.
These two pics were taken in Corvallis this morning as we were leaving coffee. It shows how low the snow was in the foothills of the Coastal mountains to the west. 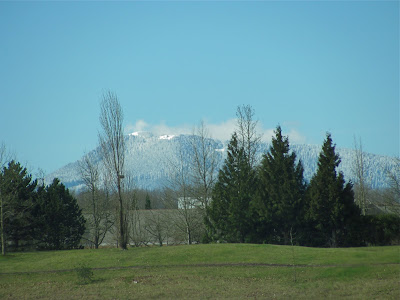 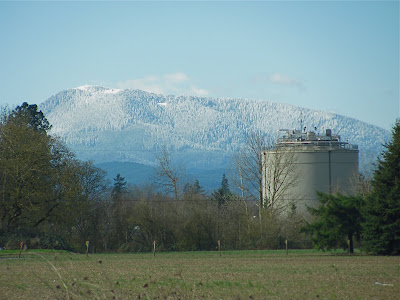 We drove to Salem and stopped at Sushi Kyo for lunch. After that we decided to stop at Cycle Country in Salem, which is the Suzuki/Honda dealer. They had one black Gladius in stock but it was buried under a big shelf so we wandered a few minutes and just left. It is a fairly small shop so there wasn't much to see.
Back onto I-5 towards Portland. For some reason there was a lot of traffic today, not sure why. Maybe due to the long weekend.
Mount Hood was showing itself in all it's snowy splendor. I took the following pic. It isn't in great focus, but we were doing about 70 mph and it was through the car window. 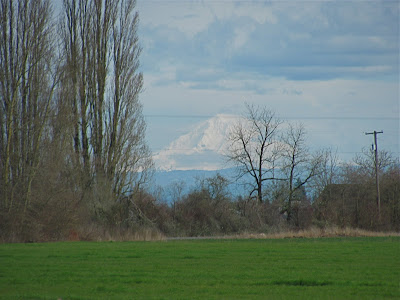 Finally we arrived in Beaverton and went directly to Bob Lanphere's Beaverton Motorcycle. Home of Suzuki, Honda, Yamaha, and Kawasaki. They are a large dealership with a lot of bikes in the showroom and quite a bit of accessories and gear too. I don't know if she mentioned dealer names but you might know it from Bluekat's adventures when her son bought a bike a week or so ago. It was the same dealer.
We wandered back to where we had last seen the Gladius. Uh oh, there was only a black one. I was starting to get worried as I had called on Thursday and was assured they did in fact have a blue and white one in stock. We each took a turn sitting on the black one. Turning the key on and playing with the switches.
Finally we talked to a salesman named Dan. Turns out he was the same salesman I'd talked to on the phone. He assured me they did in fact still have the blue and white one, but they were unable to sell either of them. Doh! Turns out Suzuki issued a rectifier recall yesterday. Doh! The parts won't be in until March 3rd and then they still have to install the replacement.
So we hummed and hawed and went and looked at gear and tried on helmets. I was looking to try on a Fulmer helmet we'd seen at Eagle Leathers when we were coming back from the motorcycle show. It is the only one I'd ever seen that had retro reflective painted graphics over the whole helmet. They make it in one model. The M1 Modular Flamethrower Trident FTT. behold..... 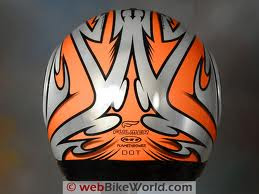 The helmet on the left is without direct lighting and on the right is it's reflective properties with direct lighting such as headlamps from opposing traffic or traffic coming up behind you at night. I don't know why every helmet manufacturer does not use this on every helmet made. Hi-vis doesn't work well at night, but this does.
It looked awesome when we saw it in person and their website claimed Bob's was a dealer. We didn't see any Fulmer helmets at all so we asked a salesman. Sure enough there were some on the bottom of a rack. Not in Flamethrower but they did have other modulars. My Scorpion is a size medium and a little loose, my old HJC was a small and a little tight in the jaw. He had me try on a small and it was too big. Go figure. I did find it lighter than my Scorpion but the modular feature felt clunky. My Scorpion is only two years old and to tighten it up I just put my ponytail higher up on my head. Snugs it up quite a bit, no new helmet needed.
We wandered enough and talked about bike options. Wondered if they would match the price of the dealer in Salem. We decided the Gladius had all the goodies on it that I wanted/needed and that I really didn't need to spend $4,000 more just to have a Triumph. That's right, when it came to the voices doing battle in my head, the referee won. Fiscal responsibility made Want and Need shake hands and play nice. A hybrid of the two ruled the day. 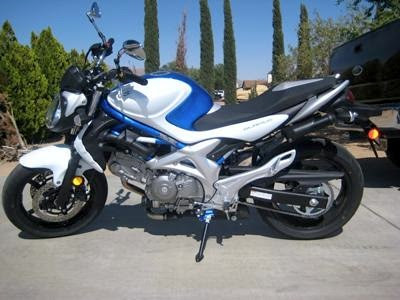 We decided if they'd match the price of Salem ($2k under MSRP) we'd put down a deposit so no one else could buy it and we'd pick it up in two weeks after the recall work was complete.
We went to find Dan. He showed us where the white and blue one was hiding on the floor. Troubadour agreed with me it is much more striking than the black. We had another chance to sit on it and turn the key and play a bit. We were not offered a test ride and did not ask for one. We know it's reputation via the SV 650 and it has a good warranty.
Time to negotiate. At first Dan stated their listed price was with the $1,000 cash coupon from Suzuki. We begged to differ since subtracting the coupon would make it the price of the one in Salem. He asked us if we had a print out of Salem's price. We did and we gave it to him. He in turn took it to his manager. Manager said yes to matching the price. 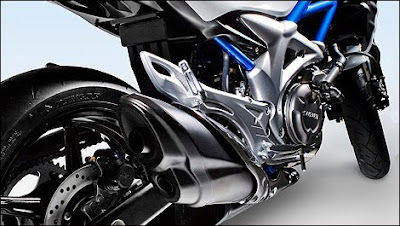 We crunched other numbers. He said they had to add over $700 for freight and PDI (pre-deliver inspection)/bike build. Troubadour told him we'd pay the agreed on matching price with no extra charges, playing on the 'guaranteed sale' aspect. He took that to his manager and the manager said yes.
About 10 minutes later we wrote him a check for the deposit, signed some paperwork, made him promise to take it off the floor so the sammich grabbers couldn't play on it and scratch it and off we went. 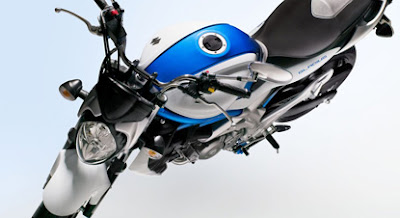 Did we get a bike today.... almost, not quite. We made the decision and that has taken a lot off my mind. Was hoping to take it for a ride tomorrow but it wasn't meant to be....yet. 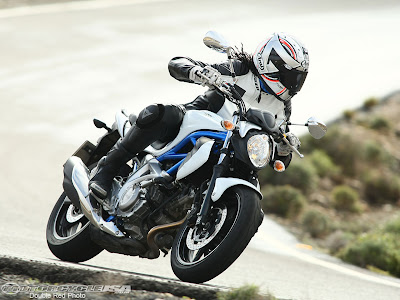 I am happy with the decision and also like some of the features it has that I don't think the Triple has, such as 4-way hazard flashers, gear indicator and a fuel reserve tripometer.
Troubadour has decided it looks so much like a Ducati Monster 696 with it's trellis frame that we need to remove the Gladius badging and have a sticker made that says "Ducopi", since Suzuki appears to have copied some of the styling. I did find a picture online that shows the Gladius and the Monster 696 together. Reviews claim Suzuki was targeting the Monster crowd when it designed the Gladius. 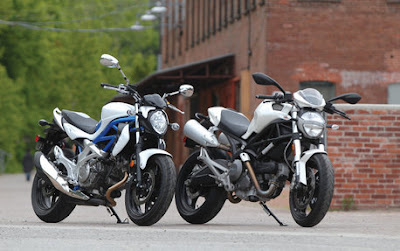 I think the Gladius combines the styling I liked in the Monster with some characteristics of the Triple at a price I can live with and with reasonable maintenance costs. It is a good compromise and I am looking forward to many miles of riding when we bring it home.
Since it was $4k less than a Triple, does than mean I get to buy some farkles? First on the list - heated grips, although Troubadour thinks those mirrors really need to be replaced by some bar-end mirrors stat.
-Au Revoir
"You have to leave the city of your comfort and go into the wilderness of your intuition. What you'll discover will be wonderful. What you'll discover is yourself." ~ Alan Alda
.
Posted by Trobairitz at 10:00 PM