.
I was going to post up a review of the Melia riding boots that I bought last year, but I've found the camera batteries are dead. Troubadour informed me of the location of the spare pair, but the natural light is gone and I don't want any pictures being too yellow from our compact fluorescent lights. That post will have to wait for another day.
We haven't been up to much lately. Work, work and more work. It has been crazy busy at work for the both of us the last few weeks and weekends seem to bring trips out of town for this and that so we haven't been riding on the weekends. I have been wanting to get out on the TU because it has been several weeks since my last ride, but it just hasn't worked out.
We are still looking for a different bike for me - an upgrade so to speak. I am reluctant to spend the funds on a brand new shiny one if I can find a great deal on used bike so we have been perusing Craigslist and also the motorcycle shops in the valley. Still thinking a Street Triple might be the best fit, but we'll see.
We did find this used 2010 Street Triple R for sale. The BMW shop in Tigard has it for sale right now but I think the price might be a little steep even though only has 653 miles. I can't figure out why someone would sell it after only 653 miles, but to each their own. Let me just say that I don't need the R model and haven't gone searching for it, this is just what happens to be for sale used. 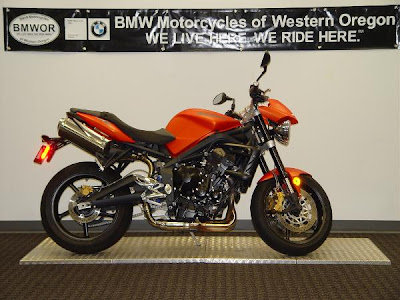 Even though they are asking $8,995 for it, which is the same price as a regular Street Triple is new, I do think it is priced high. Although.....I know a certain Lucifer Orange Tiger that it would match pretty nicely. Hmmmm.
The only other used one we've been able to find in two states is this one being sold privately near Seattle. That is if it is still for sale. Could be someone already bought it and the Craigslist ad hasn't been updated. It is a 2008 with 5200 miles and he is asking $5,800. This seems like a much better deal, but we aren't too keen on the long haul to and from Mercer Island in northwest weather as well as the hassle of registering an out of State bike. 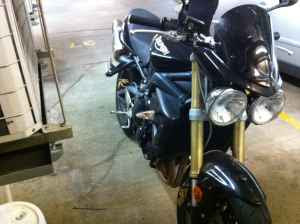 Not a great picture but it does give you some idea of what is out there. Doesn't seem to be a lot that isn't a litre bike or a Harley at this point. Of course if I wanted a Sprint or a Speed Triple there are many many used ones to choose from right now. Maybe we just need to be more patient to see what people will part with as the weather gets nicer.
One of our friends rides a Yamaha FZ6 and she really likes it. It is something we thought might do for me if the price was right and the fit was good. There seems to be a few used ones up for sale. I don't like a full fairing with lowers like the Ninja had, but an upper mini one might be okay. I have yet to sit on one but the offer is there next time we see her with her bike. 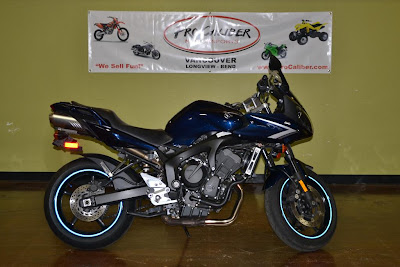 This is a 2008 model with 22,000 miles on it and they are still asking $4,995. Maybe because it is a dealer. We'd still have to register it from out of state too. Price is easier to take than that of a Street Triple but I can't help thinking that for a few extra thousand I could be on a Triumph. Of course either one would keep up with our group and get me over the hills just fine.
A few weeks ago we were up in Portland at the Triumph/Moto Guzzi shop and I had the chance to sit on the Moto Guzzi V7 Classic. It felt quite heavy and awkward to me. Troubadour thinks it was because I had just sat on two different Street Triples but I dunno..... Because of the fit and feel of the Moto Guzzi it has definitely been crossed off my short list.
Due to my poor circulation I believe the BMW G650 GS has also been crossed off the list. The handle bars feel a tad too high for me and the last thing I want is my hands going to sleep from the height and/or vibration. My hands even fall asleep if I am in the dentist chair too long so this has to be a consideration when choosing a bike for all day riding not just short jaunts.
One bike that is still on my short list is the Suzuki Gladius. Most people have a love it or hate it relationship with the Gladius but I kind of like it. Mind you I like to think outside the box and have a tendancy to like things you don't see everywhere and aren't as common. Maybe I'm just odd. 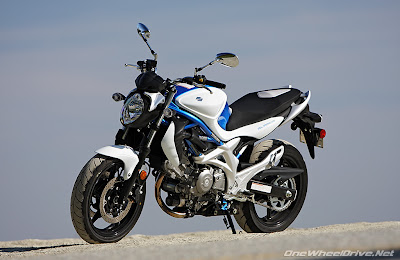 When we were in Portland I sat on one and it didn't seem that different ergonomically than the Street Triple. I thought it seemed a little heavier and checked out the specs when we got home. Sure enough it is about 25 lbs heavier that the Striple. Not much I know, but I found it odd that I noticed. Now, I know there is a huge fit and finish difference between the Suzuki and Triumph but while Suzuki claims the Gladius retails for $6,899, we have seen them new on the showroom floor for about $5,999. Not bad for a brand new 650 cc machine, but still not a Triumph.
Ahhh decisions. My short list has been changing from week to week depending on what we see that catches my eye and if we have a chance to sit on something different. Damn fickle women, we're so hard to please. I'm not indecisive, am I?
For now, I will keep looking, and waiting, and riding the TU when weather and time permits. Maybe when we least expect it we'll either find a great deal like Troubadour did with his Tiger or decide to just bite it and buy new. Time will tell and I will try and be patient. I know the right bike will come along and I'll recognize it as soon as I see it and/or sit on it. Still waiting to feel the love....
-Au Revoir
"How can a society that exists on instant mashed potatoes, packaged cake mixes, frozen dinners, and instant cameras teach patience to its young?" ~ Paul Sweeney
.
Posted by Trobairitz at 7:35 PM