.
As Bobskoot recently commented, only 9 more sleeps, well hopefully only 7 more now. The weather is certainly helping with the wait. Wednesday morning we had a bit of snow at home which melted by early afternoon. However, Thursday morning we woke to 30˚F and this..... 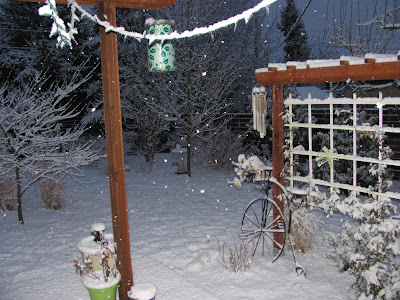 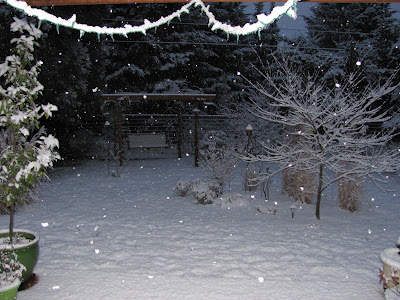 Considering how much snow other parts of the country have been getting, it doesn't seem like much, except that we hate snow. One of the reason we moved out of the Okanagan was the amount of snow that fell. Of course every winter we have lived in Oregon we've gotten snow. Some years more than others. Sure it looks all pretty, but only until the roads turn a slushy brown and most people in Oregon cannot seem to drive in it.
As the sun came up (somewhere behind those clouds) it became lighter and I was able to take a picture without using the flash. 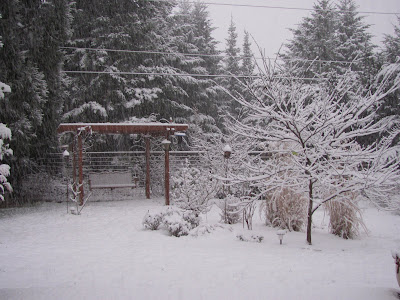 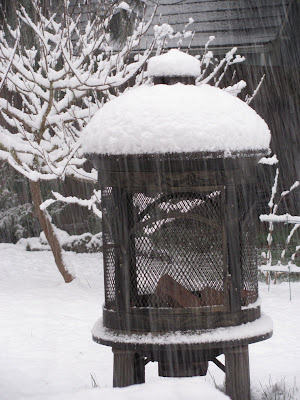 (Poor little fireplace, ready to go)
It was decided that Troubadour shouldn't ride to work that morning so he took the car and dropped me off at the office on the way. We sold his truck a few years ago as it had become a lawn ornament since he rode everyday.
The weather service was saying to expect flurries off and on all day with highs in the mid 30's. By noon the sun had come out with not a cloud in the sky. The roads were all clear but remained wet. We didn't have anything on our calendar at the office Thursday afternoon so my boss drove me home about 1:30 or so.
The yard looked like this by 2:00 pm. 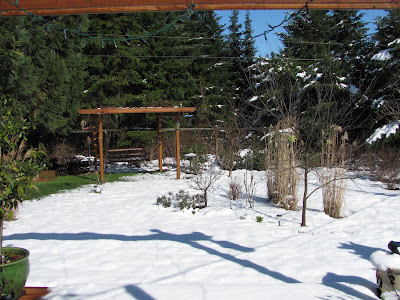 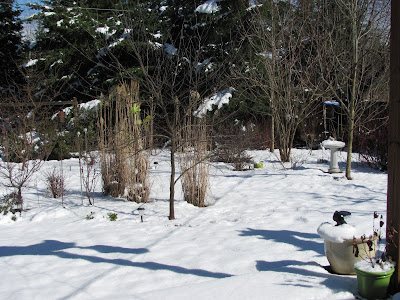 The temperatures were to dip into the 20's Thursday night and we were worried the roads might be slick Friday morning. We woke to 23˚F yesterday morning but the roads were dry. Troubadour road the Tiger to work, which made him a happy camper after having to take the car for two days. 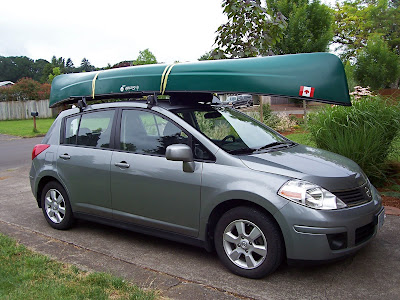 I left for work just after him and stopped by the post office on my way to the office. I got back in the car and started it, but when I put it into reverse, it stalled out. I thought it was odd and maybe I didn't quite have it in reverse, but between gears. Put it back in park, turned it off and tried starting it once again. It tried to turn over but would not start.
I was not a impressed. It was 23˚ outside, I was parking in a 15 minutes parking spot and my 2007 Nissan with only 36,000 miles on it had left me stranded. I quickly realized my cell phone was at home on the charger. Bollocks. We have AMA membership but the phone number and membership number are programmed into my cell phone.
I gathered my things, wrote a quick note to leave on the dash, "Car won't start, waiting for tow truck, please don't ticket." I walked the almost 3 blocks to work wishing I had worn a warmer coat. Got there, cursed and swore some more, and called Troubadour and left him a voice mail to call me when he got to work.

Troubadour to the rescue. He took the shop truck from work and came and picked me up to see if it would start. He tried and it started right up. I went to put it in reverse and nothing. Stepped on the gas pedal but petrol was not flowing where it needed to go. More bad words were said. A lot more. He called AMA and they had a flat bed tow truck out within 20 minutes. While waiting I called the local Nissan dealer and gave them a heads up.
We have read on the internet that Versas have a lot of trouble with fuel filters and were expecting that was the problem. The guy I talked to on the phone at Nissan asked me if there was a light that came on on the dash while trying to start it that looked like a car with a key shape inside it. I told him I had no idea. (Little did I know he'd just diagnosed the problem - must happen often)
We followed the tow truck to the dealer, checked it in and Troubadour took me to work then hurried back to his work. Once again my boss was nice and drove me home. He even bought lunch first. It was another gorgeous sunny day, which was starting to warm up. I think we actually hit 35˚F yesterday.
Nissan called me about 3:30 and let me know it was the BCM - body control module. It faulted due to an immobilizer error in the system. Apparently the car was not recognizing our keys. WTF? The keys unlocked the car and initially started the car. The same keys we've had for almost 4 years. Turns out we need a new BCM and the fix, including parts and labor, is $480. Ouch. Of course it came with a 36 month/36,000 mile warranty. We've had the car 4 years next month so that did us no good. At least the darn thing is paid for. 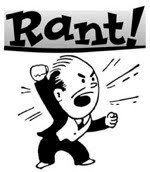 More ranting and raving and bad words were said. Not to the service person who called, but after I got off the phone. You know, when I found out the part won't be in until Tuesday and that the Nissan tech is out until Thursday. They are also a VW and Volvo dealer but those technicians cannot install the Nissan part.
As a result we are on two wheels until next Friday at the earliest. Wouldn't be too bad except we woke up to a balmy 15˚F this morning (-9.4˚C). It was a chilly ride to Saturday morning coffee. I felt like the Michelin man in all my layers. I opted to ride pillion with Troubadour, as I knew it would be warmer than me on the TU. Not only does he make a great windscreen, but I can also hide my hands between us so they don't get too cold while in my gloves.

The snow is slowly melting. It is supposed to get up to 38˚ this afternoon and 50˚ and rain tomorrow. Weather report states there is over 2 inches of rain on the way. Of course there is. It will be a wet commute to work this week. I don't like getting all geared up for a three mile ride in the morning, but we do what we must. At least they don't have to use gravel in the rain. Hopefully they have already started sweeping up the tons of it they used this week.
Sure wish I had that Gladius to ride. Oh well. This gives me at least another week to say my goodbyes to the TU.
Hope everyone gets out for a ride, weather permitting.
- Au Revoir
"Every path hath a puddle." ~ George Herbert, 'Jacula Prudentum'
.
Posted by Trobairitz at 2:29 PM