Trying to be patient....

.
I am trying to be patient, waiting for the Gladius recall to be fixed so we can pick it up. Have been checking out the Gladius forums and looking at all the farkles and mods people seem to be doing.
So, rather than boring everyone with that, I thought I'd post up a gratuitous food post.
Yesterday was President's Day here in the USA. I was lucky enough to have the day off because the Courts were closed, but Troubadour had to work. I went in to the office and did an hour or so of work while it was quiet and then went to a hair appointment for a cut (hadn't had one since October). I knew I had to put it up in a ponytail to cook dinner so I took a picture in the mirror to show Troubadour when he got home. The face under the helmet..... 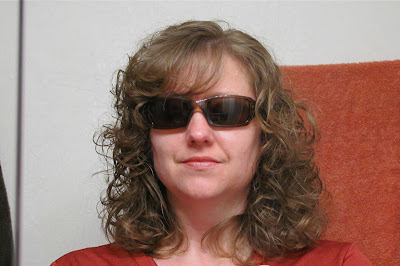 (C'est moi - I'm never without my Oakleys)
After that I ran a few errands and went home and did a few hours of yard clean up. We have some tall grasses out front that needed to be cut down for spring as well as some Autumn Joy Sedums that needed deadheading. After 2 hours of using the Felco pruners my right hand was so sore (and still is). The yard looked better though. Was nice to get out and enjoy some sunshine.
I had a few minutes to putter on the computer and then it was time to start dinner. When I have the day off and Troubadour works I usually have extra time to prepare a nice dinner that is more time consuming than our usual weeknight fare.
I opted for a Ratatouille of sorts. About 3 years ago I found a recipe on the net and have modified it to suit our tastes. I like to make it during the cooler months as it is nice for a chilly day. While this is not a traditional Ratatouille recipe by any means, it is still one of our favorites. If I had of been thinking, I would have gathered all the ingredients together and taken a picture before I started.... next time.
First you take 1 eggplant (aubergine) and chop it and cook it with a little water and salt until it is soft. 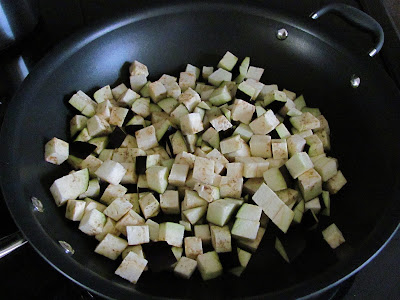 (chopped eggplant in frying pan)
I also add at least 3-4 garlic cloves into the mixture when almost done as well as a teaspoon or so of Herbes de Provence. Once cooked, I spoon it into a large casserole dish I have sprayed with olive oil.
Then sprinkle the eggplant layer with Celtic sea salt and fat free feta cheese. 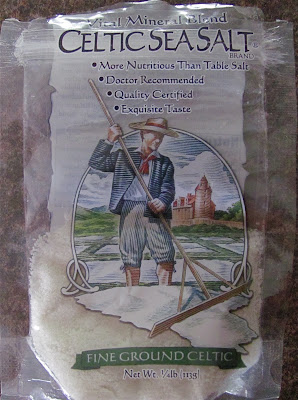 (Celtic Sea Salt - did I really need to label it?)
If you don't like eggplant, I am sure you could substitute some other yummy vegetable. 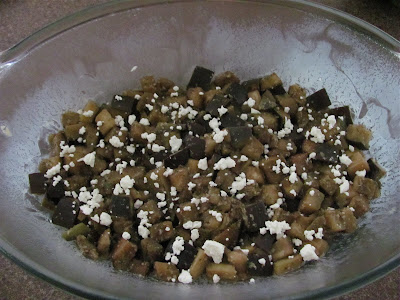 (cooked eggplant mixture in casserole dish)
There is a lot of slicing involved in this recipe. I am lucky enough to have a nice Microplane mandolin I was given for my birthday a few years ago. It makes the job easier as well as keeps the veggie slices uniform in thickness. 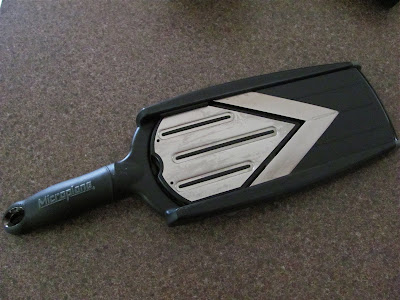 (the mandolin)
Slice 2 zucchini and layer on top of the eggplant mixture. Sprinkle with the sea salt and feta. (I took the pictures prior to the feta and sea salt so that the layers would show better. And yes I do layer it like that even when not taking pictures) 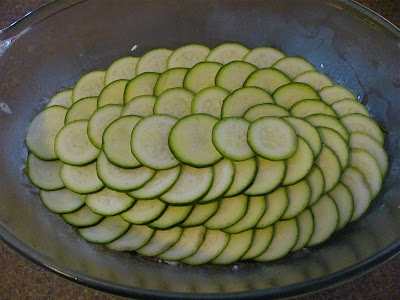 (zucchini layer sans salt & feta)
Slice 1 white onion (I used a Mayan sweet) and layer on top of the zucchini. Sprinkle with sea salt and feta. 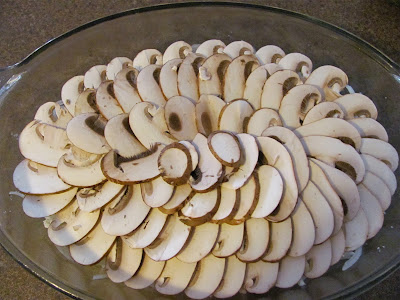 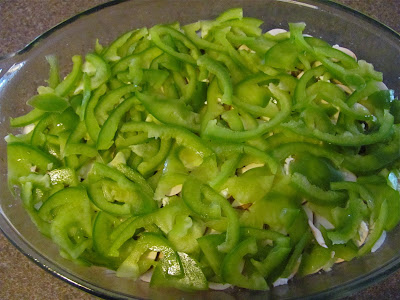 (green pepper layer sans salt & feta)
For the top layer, chop 5-6 large roma tomatoes and layer on top of green peppers. Sprinkle with salt and feta.
It looks like the following pictures when assembly is complete: 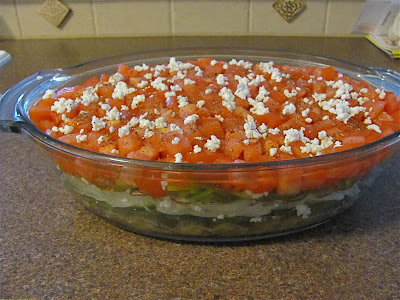 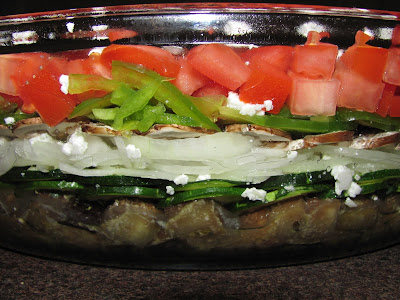 Place uncovered in a 350˚ oven for 45 minutes. The aroma while it is cooking is wonderful. While the veggies are cooking you can fix rice or couscous to accompany it. With the juice produced in cooking it is nice to have something to go with it. I usually use couscous but chose to serve it with a Bhutanese Red Rice I found at our local Market of Choice. It takes about 45 minutes to cook so was timed just right. 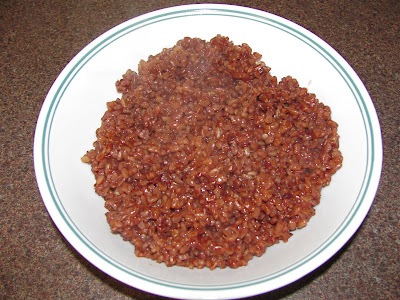 (bowl of cooked Bhutanese red rice - still steaming)
After 45 minutes remove the Ratatouille from oven and let rest for a few minutes before serving. The vegetables will be al dente cooked in the oven, as opposed to turning to mush when cooked in a frying pan.
You will notice that the level of veggies has dropped about 1" while cooking. There will be juice that has pooled in the bottom. You can either scoop it and serve it with the veggies onto the rice and/or couscous or save it for another dish that needs veggie stock.
For those not watching your carbohydrates, it is great served with a loaf of crusty warm French bread. If you are a meat eater you might rather have this as a side dish rather than a main course.
Here is a picture of the finished product. 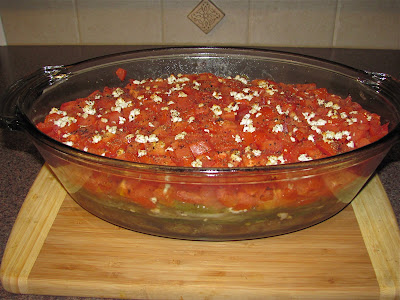 (ready to serve Ratatouille)
And my plate before I started eating. Keep in mind these are salad plates, we don't use dinner plates so it isn't as much food as you think. 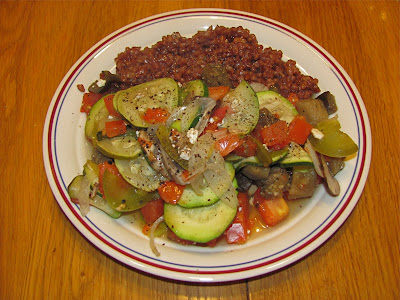 (ready to dig in)
And the casserole dish after dinner. 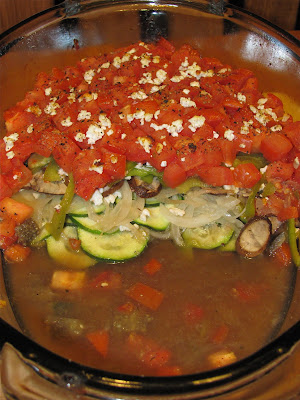 (enough for left overs the next night or lunch the next day)
If you want to make this dish the shopping list is as follows: 1 eggplant, 2 zucchinis, 1 large onion, 4-5 brown mushrooms, 1 green pepper, 5-6 large roma tomatoes, sea salt, feta cheese (I use fat free) Just remember to cook uncovered for 45 minutes at 350˚.
And on a side note Basil decided to hang out on the back of a chair and supervise the preparation and cooking. The chair is fairly close to the prep island in the kitchen so he wasn't too far away. He likes to lay in the corner as his belly hangs down into an opening where the cushion meets the arm and back of the chair. He pushes the cushion out to make room. 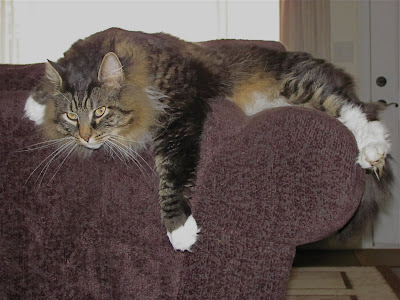 -Au Revoir
"“You will never get out of pot or pan anything fundamentally better than what went into it. Cooking is not alchemy; there is no magic in the pot.” -'Dishes & Beverages Of The Old South', Martha McCulloch-Williams (1913)
.
Posted by Trobairitz at 7:46 PM