Day twenty-three in the 29 in 29 photo adventure.
Today's pictures are brought to you by the fricken little bugger who glued our locks closed at the office sometime during the night Tuesday night.
My boss and I arrived at work at about 7:50 am yesterday morning. What we discovered was that someone had used some type of glue or silicone to glue the locks and deadbolts closed on both our front and back doors.  Trust me, many bad words were said, most of them starting with the letter F.
We were outside and flagged down a police officer (police station is only a block away) and he said concentrate on getting into the office and file a report later. Okay.......my boss had to be in court first thing and left me to find a locksmith and handle things.  Have I mentioned it was pouring rain outside?  I went and sat in the car to figure out what to do.
My cell phone is pretty basic and makes calls and sends text messages.  I don't surf the net or anything on it, and had no access to a phone book, so I had to call the other secretary at home and get her to locate a locksmith.  At 8:20 she called me back and said a locksmith would be at the office shortly after 9:00.  Talk about delegating.
I figured I had about an hour of wait time.  I had the camera with me so I started looking around to see what I could see from the car.

In looking around I noticed the building across the alley had the words Penny's stenciled on it.  I knew that it used to be a J.C. Penny's store back in the day, but after working and parking in that exact same spot for 11 years, I just now noticed the writing on the wall..... 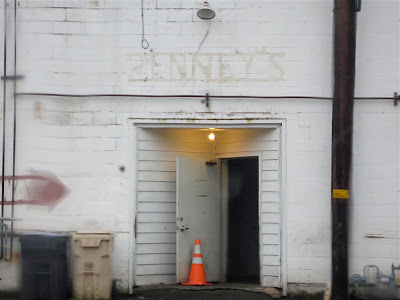 My morning coffee was begging for a hasty exit so I walked to Starbucks to use the loo.  Of course while there I had to purchase a coffee to hold me over until I could get into the office.  Was I smart enough to get an extra hot coffee?  Of course not, I got the usual - iced.
Back to wait in the car.  By 9:00 I had to use the facilities again, damn coffee, so I returned to Starbucks. I then waited outside the front door of the office under the awning for the locksmith.
Eventually my boss came back from court, the other attorney and his wife (aka, his secretary) arrived and still no locksmith.  Both attorney's had to be in court by 10:00 so they headed over early with no files and no plea petitions.  Finally the locksmith arrived around 10:00 and was able to drill out the lock in the deadbolt on the front door.
By this time we were running two hours behind and my feet were little icicles in my Keens.
I called our handyman and he was able to replace the two locks on the back door.  By 3:30 pm we had all new locks and were back in business.  Total fix $400.
I submitted an online police report later in the day, but I am sure we won't ever discover who did it.
You just never know what kind of day it is going to be when you get up in the morning.  On the flip, side it gave me an excuse to take some photos.
- Au Revoir
"Every path hath a puddle." - George Herbert
.
Posted by Trobairitz at 5:35 AM