.
Day five of the 29 in 29 photo adventure.
Yesterday was a gorgeous sunny day. A perfect opportunity to try out the new Sidi boots. We rode to coffee at 9:00 am in the freezing temperatures since we knew it would be warm by the time we left the coffee shop. 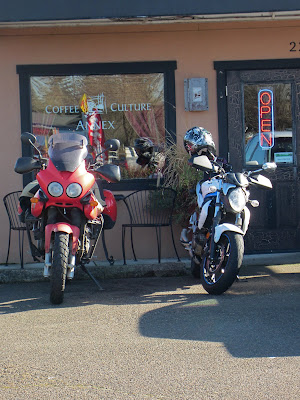 As mentioned in Troubadour's post, one of our fellow riders had an issue with her Vulcan. The menfolk went out and diagnosed it as a dead ignition coil. The closest shops are over an hour or so away and neither had one in stock so she called a tow truck.
Here is the evidence that the tow truck drivers were obviously not riders. If they were they would have known how to tie down a bike. You would not believe how long it took them to decide where they could hook the straps to secure the bike. 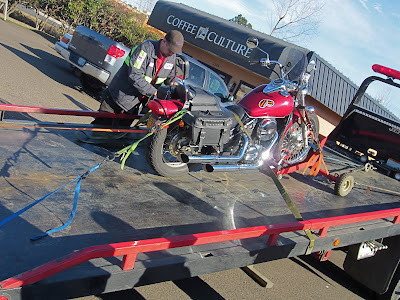 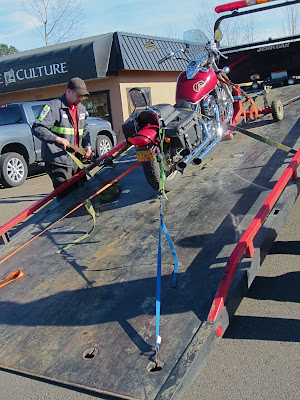 When the tow truck drove away, the bike was moving way too much for having that many straps attached. Once the bike headed off to it's home we headed out to Salem along some twisty back roads.
First stop was Marco Polo Global Restaurant for lunch. It was our go-to place in Salem for grub since they have many menus. One being a vegetarian/vegan menu. We ordered the veggie wonton soup. 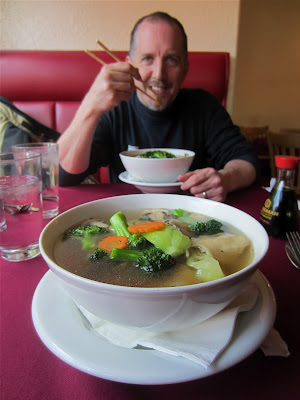 The soup looks tasty, yeah? What you can't see in that picture is the little tiny bugs swimming the backstroke in the soup. We think they must have come from unwashed broccoli. We sent the soup back and after about 15 minutes new bowls arrived. 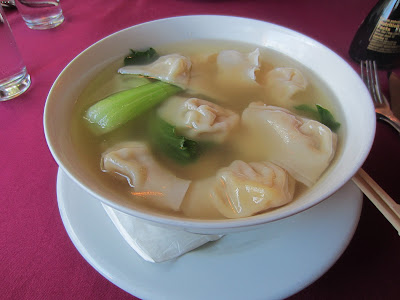 We were told that it contained no broccoli since they made a fresh batch of soup and didn't want the same thing to occur. We might have believed them if Troubadour hadn't found a small piece of broccoli in his bowl. Maybe they just used the same bowls...... ummm we figured they just used a sieve and cleaned up the soup we had. Who knows? They did offer us a free dessert but we asked for a few bucks off our bill instead. After this incident and the odd lunch we had last time we need to find another go-to restaurant in Salem.
From lunch we headed to Costco then home making a few stops along the way for petrol and to pick up a rose bush. It was an awesome day. Left the house at 9:00 am and didn't get home until 4:30 pm. It was nice and sunny and 50˚F when we arrived home. I could get used to more winter months like this.
Oh - and the Sidi boots were great. They are taking some getting used to as I can't really feel the shift lever and rear brake and managed to hit neutral twice yesterday when shifting up, but overall I think I will really enjoy them. For some reason I felt like I couldn't flat foot the bike as well. I don't know if it was my imagination or if the soles are just that different from my other boots. My feet were warm though, no heated insoles needed. Yay.
-Au Revoir

"Just living is not enough.... one must have sunshine, freedom, and a little flower." - Hans Christian Anderson
.
Posted by Trobairitz at 8:20 AM